'INHUMANS' EPIC SERIES
REVEALS ITS ROYAL CAST
Another photo treat from 'EW' today as well - the 1st photo with the cast assembled for Marvel's new television series INHUMANS in full costume! They're planning a show of such 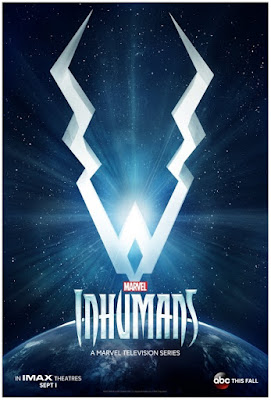 epicness that the first two episodes will first be aired in Imax cinemas in USA September 1st only to be launched officially at ABC September 26th!
INHUMANS follows the royal court of a race of hybrid alien human super beings who’ve undergone a transformative “terrigenesis,” a process that unlocks sometimes strange, but uniquely powerful gifts! The story takes place on Earth and in the INHUMANS’ technologically advanced city Attilan — where the Royal Family faces a critical juncture where everything they’ve ever known is at risk. They are ruled by Black Bolt (Anson Mount), whose voice has a destructive power. Iwan Reon is his evil brother Maximus 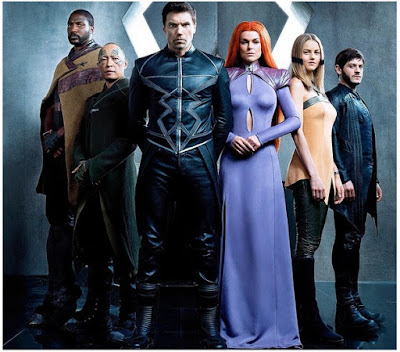 who wants to usurp his rule. Eme Ikwuakor is Gorgon, leader of Attilan’s military who has super strong legs which can generate seismic waves. Isabelle Cornish is Crystal, the youngest member of the family who can control the elements. She also has a 2,000 pound dog

Lockjaw with the ability to teleport. Serinda Swan is Medusa, Black Bolt's wife and queen, a resilient warrior who can move and control her hair the way most people use their hands and fingers. Ken Leung is Karnak, Black Bolt’s closest advisor who can see the fault in all things – people, plans, structures, everything!