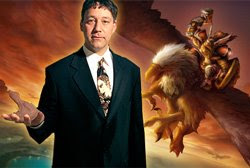 According to "Entertainment Weekly", Sam Raimi has just signed on to direct "Warcraft", the movie adaptation of the ultra popular video game "World of Warcraft". He plans to do it after "Spiderman 4".
Warcraft" centers around the fight between the Horde and the Alliance. "Wrath of the Lich King", the last game published was sold in 3 million copies just in the first day after its release.
Raimi plans to make it as a fantastic, action packed story.
Posted by DEZMOND at 9:19 PM