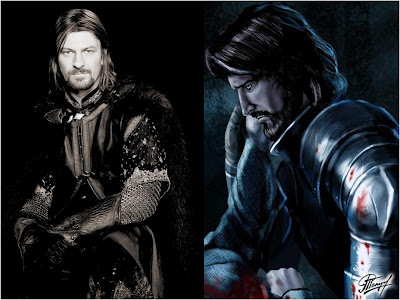 I've already written that HBO is preparing a TV show based on George Martin's fantasy saga "Games of Thrones", but now they've got one of the main stars. Sean Bean will play lord Eddard, and the shooting starts this October.
The saga centers on the battle among seven kingdoms and on the two families which fight for the Iron Throne that will give the winning family the power to rule and survive during a 40-year long winter. Lord Eddard is a man of honour and justice. He is the right hand of king Robert (Mark Addy). Kit Harrington will play Jon Snow, Elddard's bastard son, Brendan Gleeson will play Joffrey, king Robert's son, and Peter Dinklage is also in the cast.
Posted by DEZMOND at 9:08 PM