TIMBERLAKE, REYNOLDS AND COOPER FIGHT FOR THE GREEN LANTERN'S SUIT 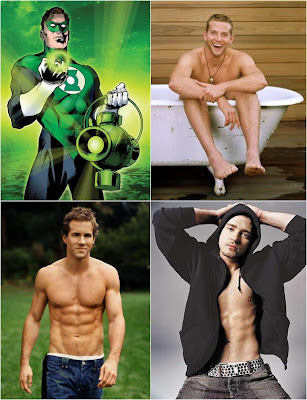 As you can see these guys have taken off their clothes so eager and ready to jump into the mossy suit of The Green Lantern. According to Hollywood Reporter, Justin Timberlake, Ryan Reynolds and Bradley Cooper are the final three candidates for the role of the famous super hero. After a very long search, it seems that the director Martin Campbell has narrowed his choice down to these three Hollywood studs. Apparently all three of them were under the holding deal with Warner Bros. and it has just expired which means that they can seek other roles. That's why Campbell and his producers have to be quick and chose one of them as soon as possible.
I'm voting for Timberlake or Reynolds as the second choice. But we will see very soon who's the winner and who'll wear the green suit and carry the green lantern.
Posted by DEZMOND at 10:17 PM