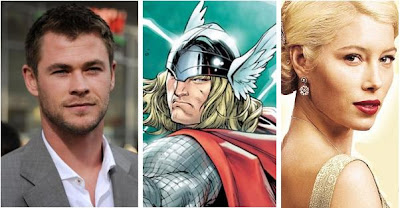 It seems that beside Chris Hemsworth as Thor, Tom Hiddleston as Loki, Brian Blessed as Odin and Samuel L. Jackson as Nick Fury, Keneth Branagh's THOR has got the first lady in the cast: rumors say that Jessica Biel has been offered to portray the main female role, the love interest of the blonde God, Amora the Enchantress.
The best news for me personally is that the costume designer in THOR will be my absolutely favourite Alexandra Byrne who already worked with Branagh in his amazing adaptation of HAMLET for which she did stunning costumes. Byrne's my favourite costume designer ever since she did the work in Shekhar Kapur's ELIZABETH and ELIZABETH THE GOLDEN AGE. For making probably the best costumes in the cinematic history when she dressed Cate Blanchett in ELIZABETH THE GOLDEN AGE where she created the best wardrobe that any movie has ever seen, Alexandra won an Oscar last year. Can't wait to see her work in THOR.
Posted by DEZMOND at 10:53 PM