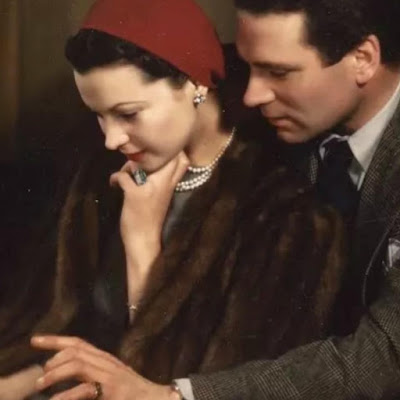 of Vivien Leigh and Laurence Olivier. Olivier asked Leigh for a divorce on May 19, 1960, bringing to an end the 20-year marriage of one of the first modern celebrity couples. The movie is adapted from Donald Macdonald’s play Letter To Larry.
BROS COMEDY TRAILER
WITH LUKE MACFARLANE AND BILLY EICHNER IS HERE
The first romantic comedy from a major studio about two gay men with a full LGBT cast in front and behind camera has just gotten its first trailer. BROS will get a theatrical release this Autumn, September 30th. From the ferocious comic mind of Billy Eichner and the hitmaking brilliance of filmmakers Nicholas Stoller and Judd Apatow comes BROS, a smart, swoony and heartfelt comedy about finding sex, love and romance amidst the madness. Our favourite hunkster Luke Macfarlane joins Billy Eichner in the leading duo. As the poster says - it is a romantic comedy that gives you all the feels, quite literally judging by the photo itself. But who could resist groping Macfarlane?
Posted by DEZMOND at 11:00 AM

Bros has me CRACKING UP!! The too old to go in the pool line and the butt pic blocking still has me chuckling.

Bros should be quite entertaining!

He does have a gorgeous butt indeed in that scene. What I hate is that they depict this cliche that for gay people only beautiful is attractive.

I think so too.

I am not sure I will watch it myself. If I do it will only be for Luke.

I really don't know much about them except their names so Viv sounds like an interesting movie.

Should be fun if they don't do a terrible casting with some modern brats.