MISS SCARLET & THE DUKE
TO RETURN THIS JUNE
Returning as soon as next month, June 14th, to Alibi Channel in UK with the second season is MISS SCARLET AND THE DUKE period set detective series which will also air on PBS in USA October 16th. Starring our 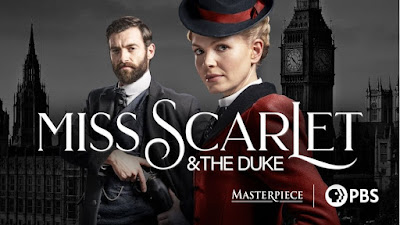 boy Stuart Martin and Kate Philips, the second series, shot in Serbian capital Belgrade, picks up one month on from the end of the previous series. Eliza has solved her father‘s murder, her relationship with William, the Duke, 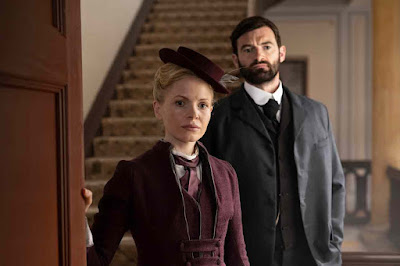 continues to slowly simmer, and Eliza continues to face the challenges of being a professional female detective in Victorian London. Eliza is hired by the sister of a missing woman for her first case this series. Her task is to find the woman, 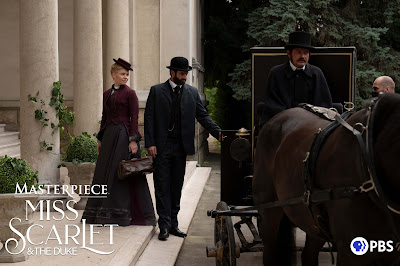 but the case was already closed by the police, so tension between Eliza and the Duke ensues. Beside Epic Drama cable channels around Europe, the six episode series will also air on BBC First in Benelux and BBC Brit in Africa.
Posted by DEZMOND at 11:00 AM

I binge watched the first season and really enjoyed it.

Then the next binge awaits you this October as you are not in UK :)

Although the Belgrade locations are lovely, why choose to go so far to recreate Victorian London?

Because we have multiple times cheaper and yet professional crews here, it is like big companies making things in China's sweatshops. Hollywood does that with films here at the Balkans LOL Most of the stuff we watch is shot in Hungary, Croatia, Slovakia, Serbia and Bulgaria.

I know. Famous movies like Fiddler on the Roof and Dr. Zhivago were shot in Yugoeslavia in Tito's day, but I thought that after the fall of the Iron Curtain, Prague and Budapest were the favorite spots. Athough part of GOT was filmed in Dalmatia.

And to think, they've never asked Dezzy to be in one of the films. Hmph!

I never watched the first. I was unsure about this one from the start. I know you were against the violence from the female lead. Did you ever end up watching this?

Don't know about this one...was it good?

I am still very much angry about that violence. I have it downloaded, but have not yet watched for that reason.

I have not watched it yet, but ladies seem to like it very much.

Zhivago was shot in my Vojvodina. We have big studios, there is Pink Studios in Belgrade and Nu Bojana in Bulgaria, plus we are cheap and you can do pretty much anything here if you pay as we are corrupted as it gets.

He was just an embryo then, Theresa, but Gattocito you should cast now even as an extra. There are lot of corrupt countries in this world, but Serbia has the advantage of having perfect landscape and old architecture. great por period pieces.

We will petition for you to be an extra in the next film that is shot there!

This may not be a popular opinion, I found the lead actress to be annoying in just the trailer alone. I can't imagine watching her for an entire show! Maybe it's the dark, oversized costumes or her small size to be throwing people around, but she just isn't believable.

Only if I play royalty.

I cannot stand the wench either, horrid actress and horrid character too. But we do ever so love our dear Stuart Martin.