THE MIDWICH CUCKOOS
WILL UNSETTLE YOU THIS JUNE
Believe it or not June is almost upon us and the first major premiere of the upcoming month will be THE MIDWICH CUCKOOS seven episode fantasy thriller series which arrives to Sky Max and their streamer NOW June 2nd as a modern day reimagining of John Wyndham's sci-fi classic with Keeley Hawes and Max Beesley in the lead roles. It is an unnerving fable for our turbulent times, a thrilling, strange and at times horrifying journey into parenthood, which lays bare any parent’s worst fear: that the thing most precious to us – a child – might desire our destruction! You can check out the creepy trailer below and tell us what you think.
WHAT IS THE MYSTERY ABOUT?
Midwich, a small English commuter town, is liberal and aspirational, populated by nuclear families and affluent streets. A place where nothing much happens – that is until the twilight hours of a summer’s day when a sleepy corner of Midwich is plunged into panic. People pass out on their feet without warning, without reason. Anyone who tries to enter meets the same fate. And nobody can understand why. When the mysterious blackout is lifted, life for those affected returns to apparent normality - except every woman of child-bearing age inside the zone has suddenly and inexplicably fallen pregnant. As news spreads and tensions simmer, it is up to gifted psychotherapist Dr Susannah Zellaby to help support those affected through the emotional wilderness. Susannah’s own daughter Cassie has fallen pregnant and harbours deep concerns about who, or what, is behind 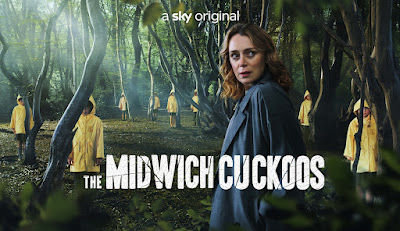 this phenomenon. Local officer DCI Paul Haynes is tasked with maintaining order but unbeknownst to them all, a terrifying force is building in the 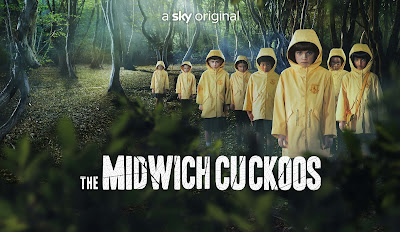 comfortable streets of Midwich. These children – potential parasites - flourish under the very love and care that their families give them. Who are these children? And what do they want?
Posted by DEZMOND at 11:00 AM

Creepy little bastards, aren't they? This should be an advert for birth control.

That sounds so creepy!

It is totally creeptastic.

All I was thinking was "Omg, how creepy!". After reading the comments, I see I'm not alone in that feeling. hahaha

White hair makes it even creepier. They definitely should have left it true to the original.

It would have been creeptastic! I remember the jeepers creepers I got from the original one. Hope this one will have the same atmosphere.

Creepiness was the point.