OF ENGLAND IN 'THE ROYALS' SHOW
Earlier this week I've informed you that E! is planning their new scripted series THE ROYALS in which Liz Hurley will play the queen of a fictional England, and now we have the prince too! NARNIA's star William Moseley will play her son, Prince Liam, the younger brother to the beloved Prince Robert. When Robert is killed in a military training accident, Liam is thrust into a spotlight. Sexy, charming and smart, he’s in love with a young American woman, Ophelia, who helps him cope with the loss of his brother and his new position as the next King of England. Liam bristles at the strict rules, which govern the monarchy: being told what to say, where to go and how to it. At the root of it all, Liam has lived in Robert’s shadow and worries that he is not a credible successor. The show will be a modern version of HAMLET dealing with power, wealth and desire.


TARSEM'S 'SELFLESS' SF MOVIE
GETS NATALIE MARTINEZ NEXT TO RYAN REYNOLDS
One of the faces that have been in focus this summer due to the success of UNDER THE DOME show, Natalie Martinez, has just earned herself a movie role: according to 'Deadline' she will join Tarsem Sing's (IMMORTALS, MIRROR MIRROR) science fiction action SELFLESS as wife of Ryan Reynolds who leads the cast in the tale of a terminally ill billionaire who undergoes an experimental procedure to transfer his consciousness into the body of a younger man, only to be hunted by the killers who murdered his host. Matthew Goode and Ben Kingsley are also in the cast.


AUGUST OSAGE COUNTY
NEW TRAILER WITH MERYL STREEP, EWAN MCGREGOR
A new trailer has been released for one of the big movie awards contenders AUGUST OSAGE COUNTRY which opens in November in USA. Starring Meryl Streep as a hard 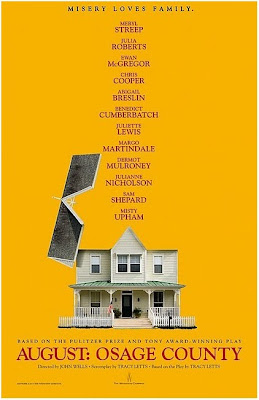 drinking matriarch of a family, this comedic drama offers a look at the lives of the strong-willed women of the Weston family, whose paths have diverged until a family crisis brings them back to the Oklahoma house they grew up in, and to the dysfunctional woman who raised them. Julia Roberts and Juliette Lewis play Meryl's daughters, Abigail Breslin is the daughter of Julia Roberts and Ewan McGregor, who plays Meryl's cheating son in law, with Benedict Cumberbatch, Sam Shepard, Dermot Mulroney and Chris Cooper also in the cast! It is interesting that Abigail Breslin even has a promise of a money award in her contract for this film if she gets any movie awards.
Posted by DEZMOND at 11:59 PM

Have a good weekend, Dez.

you too, Ivy, mine will be working one as always....

Do you work seven days per week? I go in Sunday but have a bonus day off today and tomorrow.

that is why your Dezzy is here to inform you of such delights :)

six days, and then on the seventh I refuse to even move from my armchair...

I knew the boys would approve of her without the sheriff's uniform!

Look at little Abigail Breslin, all grown up!

SELFLESS sounds good, but how much mileage does Ryan Reynolds have left.

I've no idea, he will probably continue with such smaller action flicks... But at least you can expect a visual wonder from brilliant Tarsem

What????? You post a pic of Natalie, talk about her being the wife of my guy Ryan Reynolds in a new flick but no pic of the uber hot, ultra sexy Ryan for the weekend??????? OOOOOOOHHHHHHH Dezzy you are such a tease!!!!!!!!!

ah, you can never satisfy the ladies :P
Didn't have enough space to stick in a naked Ryan too and my boys are angry with me for not posting more ladies for them :)

"The Royals" and that Streep movie both sound like winners, but methinks the first thing most men focus on when looking at that picture of Natalie Martinez isn't her face.

This is the first I have heard of August Osage County. Looks really good. Lots of actresses in there that I love!

now, why would you conclude such things about men? :PPP

quite a big movie awards contender next year!

Meryl Streep is one of my favorite actors. August Osage County will probably be a great movie!

The Royals looks like a good series... Looking forward to it.

Have a great weekend...

Gotta admit I've never heard of Natalie Martinez, but she sure is purdy!

and she is great in this one too

you can watch her in UNDER THE DOME, Ray

The Royals looks like a rip-off of The Palace by BBC. They have managed to work an American love interest in there. Can you say abdication? I knew you could:)

The cast in August is huge. I'm looking forward to seeing Streep play this character. Although we know I despise Julia dog-faced Roberts. I'll never forgive them for casting her as a girlfriend of Michael Collins. What an insult. And that accent. Jaysus, I wanted to reach through the screen and rip out her throat.

I loved THE PALACE by ITV :) a lot, dear! The king and his PR had such an amazing chemistry, I kept praying for them to end up together and they did in the end :)

Julia will ruin every scene she ever appears in in any of her future and past films....

I would've known what the thank you was for even without the name :P

I watched The Palace on Netflix. Oooh I hated Princess Eleanor and was glad to see her get her comeuppance.

Did you know our lovely Ewan has done some series where he travels with a friend on motorbike? I found one on Netflix where they motor to South Africa. I'm going to fire that one up tonight!

Meryl Streep is going to be fun to watch in August Osage County. :))

Yep, and the queen was a bitch too :) But I adored Abie and the king.... such delightful romance! I was shocked that it didn't have high viewership in UK, but they say that ITV had bad marketing for it.

Yes, dear, when they traveled Mongolia, the two of them even came upon a Mongolian orphan in the middle of a road and Ewan took her home and adopted her with his wife, the kid now lives with them in UK. I positively adore him!

i am so perverted...

That new movie Selfless with Ryan Reynolds is being filmed about 5 miles from my house I drive by that mansion everyday to drop my daughter off at day care. Its quite insane how quiet its been about the whole thing 1 news story that is it. Guess that is what you get for living in a small town in Louisiana.

it's often like that,dear. I've had movies shot in my own hometown with major Hollywood stars and nobody even noticed them even though they were shooting in the middle of the day.