ELEANOR OF AQUITAINE, WIFE AND MOTHER OF KINGS, GETTING AN EPIC SERIES AT STARZ! FIRST PHOTOS OF DAWN FRENCH IN SKY'S FESTIVE COMEDY ROALD & BEATRIX: THE TAIL OF A CURIOUS MOUSE

ELEANOR OF AQUITAINE
EPIC TV SERIES AT STARZ
Well, I did always wonder how she did not get a series before, being the mother of Richard the Lionheart and John Lackland, the wife of two kings and witness to so many major historical events. As Deadline reports, Starz has optioned the rights to historian Alison Weir’s biography ELEANOR OF AQUITAINE: A Life and its companion novel Captive Queen for the first series which will be written by Cranford's and Discovery Of Witches writer Susie Conklin! Eleanor of Aquitaine was one of the great heroines of the Middle Ages, born in 1122 and dying in 1204. She was queen of France and England as a result of her marriages to Louis VII of France and Henry II of England and was independently the duchess of Aquitaine. Together with Playground Pictures, Starz is planning a whole slate of series based on the lives of female historical figures.
ROALD AND BEATRIX
1ST CHRISTMAS PHOTOS ARE IN
Beside the festive episode of Channel 5's hit series All Creatures Great And Small, another thing we can expect this Christmas on the small screens is Sky One's ROALD AND BEATRIX: THE TAIL OF THE CURIOUS MOUSE uplifting hour and a half long comedy drama starring Britain's most beloved female comedian Dawn French, which will be the key highlight of Sky Ones and Now TV's Christmas schedule. Sky has released the first photos which show the festive atmosphere and magic we will be able to enjoy these holidays. 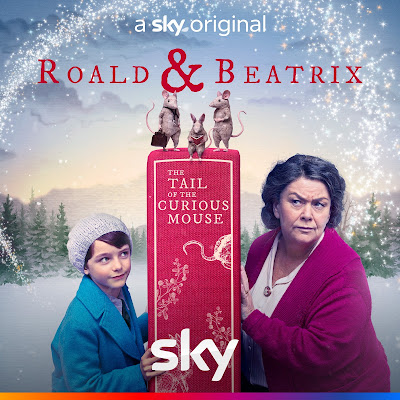 Roald & Beatrix: The Tail Of The Curious Mouse
is inspired by the true story of when a six-year old Roald Dahl set off on a big adventure to meet his favourite author, Beatrix Potter. It’s a magical story of what can happen when you are brave enough to follow your dreams… Joining Dawn French will be a cast including Jessica Hynes, Rob Brydon, Alison Steadman, Nina Sosanya, Bill Bailey and Nick Mohammed, and introducing Harry Tayler as the young Roald Dahl. As you know Beatrix Potter is the author of children's favourite Peter the Rabit, while Roald Dahl created a whole slate of stories which have made so many childhoods more enjoyable from Witches, Matilda, Charlie and the Chocolate Factory to Jack and the Giant Peach, Fantastic Mr Fox and The Big Friendly Giant. It is also interesting that Dawn French will also do three ten minute Christmas episodes of her classic hit comedy The Vicar of Dibley, and you also know that a feature film about Roald Dahl is also in the works with Hugh Bonneville and Keley Hawes as his Hollywood star wife.
Posted by DEZMOND at 1:00 PM