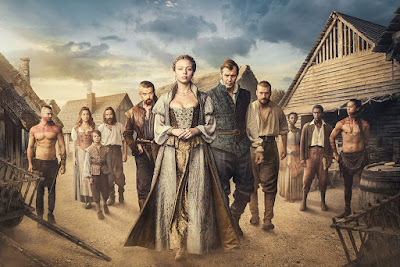 'JAMESTOWN' EPIC SERIES
TRAILER FOR FINAL 3RD SEASON!
Woe is us, spylings, Sky Atlantic has just released the airing date and trailer for the third season of their beloved historical series JAMESTOWN,
but, alas, it will also be the final one! Starting April 26th, it will see the ultimate showdown between Naomi Battrick's Jocelyn and Jason Flemyng's Governor Yeardley. 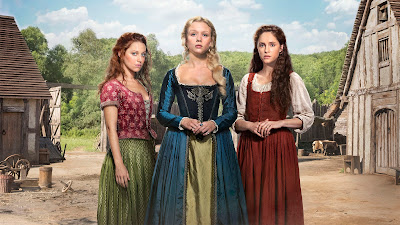 IN THE THIRD SEASON
With trade booming and the tobacco farms thriving, the settlers’ pioneering aspirations soon clash with the realities of creating a new nation on foreign
soil. Tensions rise as the flourishing community seeks expansion onto Pamunkey land, and with politics rife in the air, the idealism of the New World
is tested. As Yeardley’s thirst for power and wealth grows, there are far reaching consequences. And how far will Native American chief
Opechancanough go to protect his land? Set in the 17th century popular historical series also stars Stuart Martin, Matt Stokoe, Ben Starr, Max
Beesley, Sophie Rundle and Niamh Walsh as well as a brilliant new cast member Ben Batt. Don't miss the final season of Jamestown this spring on Sky One!


NEW 'ALADDIN' TRAILER WITH
A NEW A WHOLE NEW WORLD
The main movie event of the day was Disney's release of first full trailer for their live action version of ALADDIN which should fly into cinemas this May.
It is the exciting tale of the charming street rat Aladdin (Mena Massoud), the courageous and self determined Princess Jasmine (Naomi Scott) and the Genie (Will Smith) who may be the key to their future. Guy Ritchie directs the story set in the fictitious port city of Agrabah, written by John August and based on the animated classic. The cast also includes Marwan Kenzari as Jafar, Navid Negahban as the Sultan, Nasim Pedrad as Dalia and Billy Magnussen as Prince Anders. Eight time Academy Award winning composer Alan Menken provides the score, which includes new recordings of the original songs as well as two new ones.