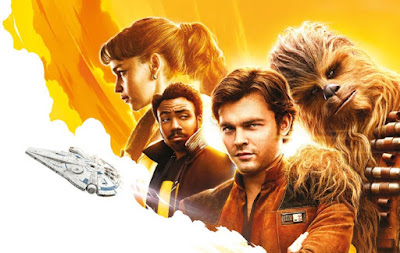 'SOLO: A STAR WARS STORY'
POSTERS AND TRAILER ARE OUT!
Fresh trailers from last night's Super Bowl for you today, people! They were mostly for sequels, prequels and other lacks of movie imagination, but I'm sure you will find one or two that you'll like! Probably the biggest excitement was around SOLO: A STAR WARS STORY which Disney has scheduled for May release but I hear the fans are not amused by the trailer and Jurassic World teaser has seemingly stolen the spotlight both on You Tube and around the web. Posters have also been revealed with Alden Ehrenreich in the title role, Emilia Clarke as Qi'Ra, Chewbacca and Donald Glover as Lando
Calrissian. Thandie Newton and Paul Bettany also star in the movie.

SOLO'S SOLO STAR WARS STORY Board the Millennium Falcon and journey to a galaxy far, far away in SOLO: A STAR WARS STORY an all-new adventure with the most beloved scoundrel in the galaxy. Through a series of daring escapades deep within a dark and dangerous criminal underworld, Han Solo befriends his mighty future copilot Chewbacca and meets the notorious gambler Lando
Calrissian, in a journey that will set the course of one of the Star Wars saga's most unlikely heroes.


'JURASSIC WORLD 2' TRAILER
SAVE THE FALLEN KINGDOM!
Universal has released an exciting new trailer for their action adventure sequel JURASSIC WORLD: FALLEN KINGDOM! Out June 22nd  it
brings back Chris Pratt and Bryce Dallas Howard to the dinosaur park on Isla Nubar but this time to save them from a disaster instead of running in fear from them.


'SKYSCRAPER' TRAILER
STARRING DWAYNE JOHNSON!
Meanwhile, Dwayne Johnson wouldn't let Han Solo and Dinosaurs steal the show, so he released a trailer for his SKYSCRAPER movie while enjoying the success of Jumanji as his most lucrative movie ever to date. In it he plays a man who assesses security for skyscrapers. On assignment in China he finds the tallest, safest building in the world suddenly ablaze, and he's been framed for it. A wanted man on the run, he must find those responsible, clear his name and somehow rescue his family who is trapped inside the building... above the fire line. The movie is out in Northern American cinemas this summer, July 13th!


'WESTWORLD' TEASER
SEASON 2 IS BACK IN APRIL!
HBO has used the opportunity to air the first atmospheric trailer for the second season of their ultra expensive series WESTWORLD which comes
back April 22nd bringing chaos and destruction to the amusement park as you can see from the trailer starring Thandie Newton and Evan Rachel
Wood! The story might delve into other theme parks that Delos Corp owns. The episodes will again air around the world a day after the US premiere. Peter Mullan is joining the cast as James Delos the founder of the park!