NBC ORDERS 'THE GILDED AGE'
19TH CENTURY SAGA FROM DOWNTON ABBEY'S CREATOR
We mentioned this one many years ago and now it is finally and quite officially moving ahead as NBC has announced their work on new period set saga THE GILDED AGE from super popular Downton Abbey creator Julian Fellowes. The ten episode series, to air next year, is set in 1880s New York, a period of immense social upheaval, of huge fortunes made and lost, and of palaces that spanned the length of Fifth Avenue. In the series, Marian Brook is the wide eyed young scion of a conservative family who will embark on infiltrating the wealthy neighbouring family dominated by ruthless rail road tycoon George Russell, his rakish and available son Larry, and his ambitious wife Bertha, whose “new money” is a barrier to acceptance by the Astor and Vanderbilt set. Marian is about to experience a whole new world springing up right outside her front door. The project was first announced five years ago.

'ILL WILL'  TO EXPLAIN
WHAT HAPPENED TO WUTHERING HEIGHTS' HEATHCLIFF
Speaking of period set classics, Wuthering Heights is getting a sequel in the form of a TV series! ILL WILL from Michael Stewart will be turned in an epic neo Gothic series which offers up the missing piece of the puzzle about Wuthering Heights‘ tortured hero: Where does Heathcliff, the ‘uncouth stable boy,’ go when he disappears from the moors halfway through the story? And what happened to him that he should return three years later a stupendously wealthy and educated man, primed to take revenge upon the Earnshaw family? As 'Deadline' reports, the series will explore the new narrative in combination with Brontë’s 1847 novel answering the question of what happened to Heathcliff, her enigmatic anti-hero. It will be done by Kudos, producers of Broadchurch and BBC's Troy Fall of a City.
Posted by DEZMOND at 1:30 PM 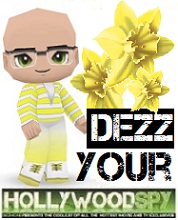