NEW TV SITCOM PILOTS UPDATES
GEMMA ARTERTON AND JAMES PUREFOY ARE MARILYN & WILDER
Tons of comedy updates today: Gemma Arterton will play the lead role in one-off TV comedy MARILYN MONROE AND BILLY WILDER which will, as Deadline writes, cover hard drinking Monroe’s inability to land the famous ‘it’s me, sugar’ line in Some Like it Hot, although some suggest it was actually a deliberate ploy by Monroe to get Wilder to rewrite the movie. James Purefoy will play Billy Wilder and this is to be a part of Sky Art's Urban Myths comedy series which will also include When Bowie Met Bolan  with Jack Whitehall as Bolan and Luke Treadaway as Bowie, The Dali and The Cooper with David Suchet!

DAMON WAYANS JR AT CBS
While we're waiting for the 2nd season of Marlon with his older brother, Damon Wayans Jr will topline an untitled multicam sitcom at CBS about Peter and Claire, a thirty something couple who are tired of their mundane life and start to reconnect with their younger, cooler selves when an emerging pop star, who is his client and is drawn to their super-normal suburban life, comes to live with them. The pop star will be played by young
Australian actor Felix Mallard! His pop star is a very positive guy who sees the good in everyone and everything, as well as being effortlessly cool and youthfully naïve.

SEAN KLEIER IN 'SO CLOSE'
Over at NBC Sean Kleier and Sasheer Zamata will lead SO CLOSE multicam sitcom from Will & Grace's Greg Malins about hopeless romantics Riley and Kyle. At crossroads in their separate lives, they are close to settling
for the wrong partner, unaware that they live only blocks apart and may be each other’s soul mates. Girl Meets World's Sabrina Carpenter will play Kyle's  crazy roommate, while Punam Patel will also star.

MURPHY BROWN CAST RETURNS
CBS has, meanwhile, managed to get all of the stars of the original MURPHY BROWN to come back in the 13 episode return of the classic sitcom! Joining Candice Bergen, who will again play the famous journalist and news anchor Murphy Brown, are lovely Faith Ford as  perky anchor Corky Sherwood, Joe Regalbuto as investigative reporter Frank Fontana and Grant Shaud as their executive producer Miles Silverberg! Deadline reports that Charles Kimbrough, who played anchorman Jim Dial, will guest star as he is now over 80.

'I MOM SO HARD' GETS DADS!
I've already reported that Kristin Hensley and Jen Smedley will lead CBS’ multicam comedy pilot I MOM SO HARD and now they got Undateable's David Fynn and Freddie Prinze Jr as their male leads. The story follows
two moms who show how their friendship gets them through being wives and mothers! Fynn will be Kristin's affable  school teacher husband and Prinze Jr Jen's athlete husband with a dry sense of humour.


'LIVING BIBLICALLY' SITCOM
STARTS TOMORROW AT CBS!
I also want to remind you to tune in tomorrow night at CBS where they're launching new sitcom LIVING BIBLICALLY about a modern day man (Jay 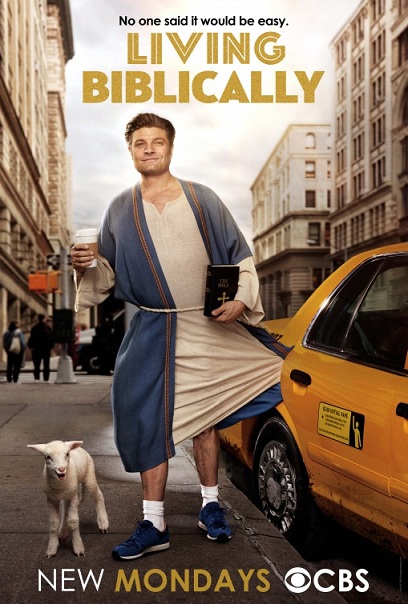 R. Ferguson) at a crossroads in his life who decides to live strictly in accordance with the Bible!


'DANGEROUS BOOK FOR BOYS'
NEW SITCOM AT AMAZON!
After she was kicked out of Kevin Can Wait in such a vile way, lovely Erinn Hayes is returning to comedy in  THE DANGEROUS BOOK FOR BOYSwhich starts at Amazon March 30th! It follows the McKenna family as they cope with the untimely passing of Patrick (Chris Diamantopoulos), their patriarch and a whimsical inventor who touched the lives of everyone who knew him. His death has left the family reeling, but hope appears in the form of a book called THE DANGEROUS BOOK FOR BOYS that Patrick created as a handbook to help his three sons. The book is a how-to guide for childhood that inspires fantasies for his youngest son, Wyatt (Gabriel Bateman). While in his fantasy world, Wyatt reconnects
with his father and learns life skills that help him navigate the real world. Swoosie Kurtz plays the grandmother, with Diamantopoulos also in the role of Patrick’s twin brother.