NEW 'ROBIN HOOD'
PICS ARRIVE FROM SHERWOOD!
Epic bliss and splendour today, my spylings, with new photos from some of this year's upcoming historical movies arriving for your pleasure and delight!
Earlier last year I showed you first photos from the latest big screen version of ROBIN HOOD and now the studio has released a bunch of new ones and
there is one thing that will immediately pop into your eyes - the costumes will obviously have a certain edge differing from what you might expect from good old Mediaeval times. 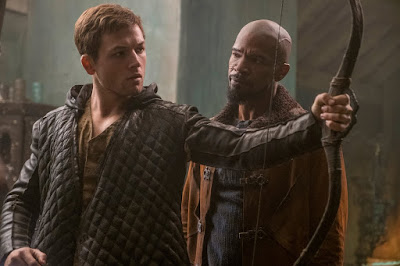 A GRITTY NEW TAKE
Directed by Otto Bathurst, this gritty new take on the classic Robin Hood story will see young Taron Egerton playing the legendary archer from the Sherwood forest, with Jamie Foxx as Little John, the leader of outlaws group
Merry Men. Eve Hewson appears in the film as Maid Marian while Jamie Dornan is Will Scarlet, half brother of Hood, member of Merry Men, and
husband of Marian. Ben Mendelsohn is the villain as the Sheriff of Nottingham with Paul Anderson as Guy of Gisborne! Tim Minchin is Friar Tuck, Josh Herdman is Righteous and Björn Bengtsson is Tydon! 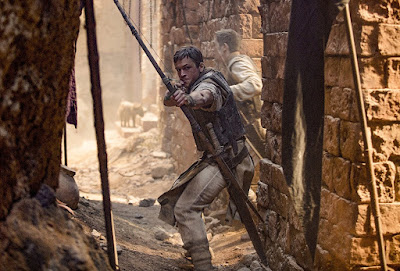 NEW 'OPHELIA' PHOTOS ARRIVE
FROM 14TH CENTURY DENMARK
Meanwhile, Entertainment Weekly has  revealed a new photo from another costume drama in their latest issue! Daisy Ridley and Naomi Watts in OPHELIA!  Based on Lisa Klein’s novel it follows the lowborn protagonist
as she becomes the most trusted lady-in-waiting for Naomi Watt's queen Gertrude and strikes up a relationship with her son, Hamlet (George MacKay). Along the way, Ophelia gets caught up in the court’s deadliest
betrayals and secrets, all while trying to find her own path. Clive Owen as Claudius and Tom Felton as Laertes, will also visit 14th century Denmark!
Posted by DEZMOND at 1:30 PM