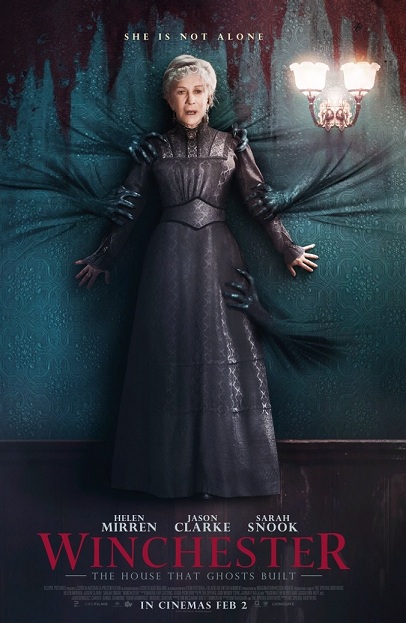 ROBBIE AMELL
TO LEAD 'UPLOAD' SITCOM
A little bit of comedy and a little bit of horror for you this Monday! The Tomorrow People star Robbie Amell will lead the cast in a very interesting high concept single camera sitcom UPLOAD over at Amazon! The story is set in the future where humans are able to UPLOAD themselves into their preferred choice of afterlife. When Nathan (Robbie Amell) meets his early death, he is greeted by Nora in his version of heaven. The series follows the two as Nathan grows accustomed to life away from his loved ones, and the alive Nora struggles to stay afloat working her job alongside Nathan in the afterlife.


CREEPY NEW 'WINCHESTER'
TRAILER, POSTER AND PHOTOS
Meanwhile, a new trailer, photos and poster have been released for period set thriller horror WINCHESTER in which Helen Mirren plays the famous heiress to the gun production empire.
WINCHESTER out next February, sees Helen Mirren staring as the wealthy recluse who feared she was being haunted by the souls of people who were killed by the Winchester Repeating Rifle. Following the deaths of her husband and child, she threw herself into the never ending construction of an enormous  mansion with more than 160 rooms, complete with staircases that lead nowhere, designed to keep the evil spirits at bay. When sceptical San Francisco psychiatrist Eric Price (Jason
Clarke) is dispatched to the estate to evaluate Sarah, he learns that her obsession might not be so insane after all.  The Queen Anne Victorian style
house, whose construction began in 1884 and continued until Sarah Winchester's death on September 5, 1922, can still be seen in California and it is big tourist attraction.