'POLDARK' EPIC SERIES
SEASON 3 STARTS THIS MONTH
Just a little bit more patience, my Poldarkians, the wait is almost over: in just a week British national broadcaster BBC One will launch a brand new season of everybody's favourite period set drama POLDARK! The third season will begin with the first episode next Sunday, June 11th and you should really enjoy it while you still can, because according to the latest rumours around the net, the 18th century Cornwall set costume drama could find its very end with the fifth season in two years time since it is expected that by then and by this tempo it will have covered all of the material written by Winston Graham in his popular novel saga on Captain Ross POLDARK and his struggles to return his family estate to its glory after he returns home
from the war for independence across the pond. The third season arrives earlier than usual, probably to avoid the clash with ITV's rival Victoria series which won the previous prime time battle for ratings last
Autumn when they both aired at the same time on Sunday evenings. BBC has, naturally, denied this, saying they just wanted to fill our summer with POLDARK. They did shoot the new season earlier in the
year than usual in order to catch the more colourful and green Cornwall landscapes in their shots as opposed to the murkier ones from the previous runs. PBS airs the series in USA from October 1st.


LOVE, SIN AND REVOLUTION
The brand new batch of nine season three episodes will see Ross and his loving but proud wife Demelza trying to forget the past and rebuild their marriage after his adultery with his late brother's wife who is also
the love of his early youth, but new arrivals threaten their fragile reconciliation. Following hot on the heels of the second series, the third
instalment (which covers the fifth and sixth book in Graham's novel saga) brings a host of new characters and worlds into play. It is 1794: Ross must traverse new family, new love and new conflicts, as the
French revolution casts a shadow over life in Cornwall. Facing battles both at home and abroad, will Ross answer the call and risk losing everything he holds dear?


A CAST OF NEW CHARACTERS
Ladies' fave Aidan Turner reprises his role as the hero Ross Poldark, as he tries to rebuild his marriage to Eleanor Tomlinson’s Demelza,
but their fragile peace is disturbed by the arrival of her deeply Methodist brothers Sam and Drake Carne, played by Tom York (whom you might have seen before in SyFy's trashy epic series Olympus) and
Harry Richardson (whom we fell in love with in ITV's period set mini series Doctor Thorne) respectively. Also returning are freshly married
Heida Reed as Elizabeth (POLDARK's old love and widow of his brother)  and Jack Farthing as George Warleggan (POLDARK's biggest nemesis) as they expect their first child and plot their ambitious
rise to be the most powerful family in Cornwall. George will try to separate Elizabeth from her POLDARK roots and will employ Elizabeth’s cousin, Morwenna, played by Ellise Chappell as a
governess to Geoffrey Charles, played by newcomer Harry Marcus. When Morwenna meets Drake Carne, the pair will fall in love and the Poldark and Warleggan households will collide once again. Sean Gilder
joins as Bartholomew “Tholly” Tregirls, a dangerous yet comical old friend of Ross’ father; Josh Whitehouse stars as Hugh Armitage, a
Naval Navigator and romantic poet besotted with Demelza; Christian Brassington plays depraved clergyman Whitworth, who hopes to align himself with George Warleggan; John Hopkins plays Sir Francis
Bassett who is looking for a candidate to lead the fight against inequality and political corruption as embodied by Lord Falmouth 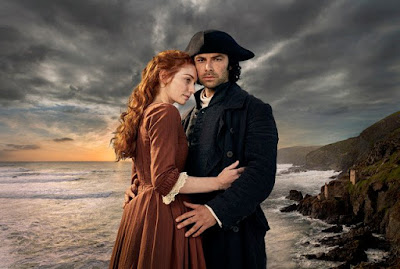