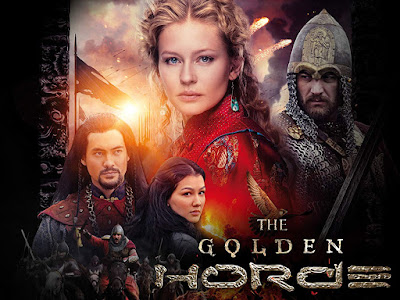 'THE GOLDEN HORDE'
NEW TV SERIES FROM RUSSIA
After airing their lavish television series on Sofia Paleologa last winter, Russian national broadcaster is now producing another massive mediaeval small screen project, this time on the inglorious THE GOLDEN HORDE directed by Timur Alpatov. This sixteen episode 13th century set historical saga should start airing in motherland Russia sometime later this year, I'm guessing Autumn or Winter and as you can see from the first photos from the sets it will be a parade of rich, pearl and jewel encrusted headpieces and
and beautiful Russian sarafans costumes! The cast is lead by gorgeous Yulia Peresild, Aleksandr Ustyugov and Sergei Puskepalis! The series, that took two and a half years to be written, is described as a mix of Game of Thrones and Magnificent Century!


YOUR HEART OR YOUR COUNTRY
The story is set at the end of the 13th century. when Ancient Rus' suffers under the yoke of the Mongols and Tatars. Grand Prince Yaroslav dreams of uniting the disparate Russian princedoms and throwing
off the hated yoke, but along this path he finds enemies in his own brother - the disgraced prince Boris, and the eldest son Vladimir.
The ambassador of THE GOLDEN HORDE, Tengri Temir, a handsome man and an admirer of female beauty, arrives to the capital
of Russia. He came to force thousands of Russian soldiers into the Horde, but he would be content with only a part of it if the Grand Prince gives him Princess Yustina, Boris's wife. Yaroslav is not ready to violate the
laws of Faith and Honour, but Boris himself takes the step instead of him, hoping that this sacrifice will provide him with a princely throne. Yustina is sent to a foreign land with her caravan ...
Tengri leaves Prince Yaroslav with a "gift" from the Great Khan -  young Nargiz who awakens new life in the prince and puts him before a
fatal choice. On one side of the scale is love and passion, on the other - the throne and life of Nargiz herself, whom neither the people nor the
lawful wife of Yaroslav are accepting. In the meantime, the Great Khan of THE GOLDEN HORDE, Berke feels a near approach of the death and
desperately dreams of an heir!  In the steppe, he meets a 16 year old Aizhan, the daughter of a rich merchant. The cruel, mentally
unhealthy old man makes this young beauty his third wife. It would seem that together with the end of the wedding, the life of the beautiful
Aizhan will end, but the young artist Nikolka, who was sent to the Horde with the emissary of Tengri Temir, is ready to give his life for freedom and the kiss of a beautiful stranger ...