Photos from new period set projects, first, pics from the Budapest sets of new TNT ten episode series THE ALIENIST showing lead stars Luke Evans and Daniel Bruhl in costume!
THE ALIENIST, based on the best selling Caleb Carr novel, is psychological thriller drama set in 1896, when a series of gruesome murders of boy prostitutes has gripped the city. Newly appointed top cop Roosevelt (Brian Geraghty) calls upon Dr. Laszlo Kreizler (Daniel Brühl), a criminal psychologist,  aka alienist, and newspaper illustrator John Moore (Luke Evans) to conduct the investigation in secret. Joining them in the probe is Sara Howard (Dakota Fanning), a headstrong secretary at Police Headquarters. Falk Hentschel will play Biff Ellison, an extremely corrupt mobster who runs illegal brothels and bars in the

city. Emanuela Postacchini will play Flora, a beautiful young prostitute at the Frenchtown brothel who indulges in some twisted role playing and is a favourite of newspaper illustrator John Moore (Luke Evans). 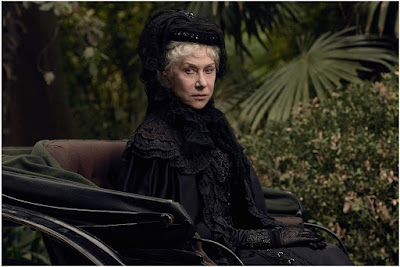 her family manufactured. After the sudden deaths of her husband and child, she threw herself into never-ending construction on her 160 room mansion, which features stairways to nowhere and doors that open onto walls, to appease the spirits.


1ST 'MAN IN AN ORANGE SHIRT'
PIC WITH OLIVER JACKSON COHEN
BBC has revealed the photo of Oliver Jackson Cohen in their two part series MAN IN AN ORANGE SHIRT  in which he plays British Captain Michael Berryman who during WW2 meets war artist Thomas March (James McArdle) in Southern Italy while chaos reigns all around them. Despite having a young fiancé, Flora (Joanna 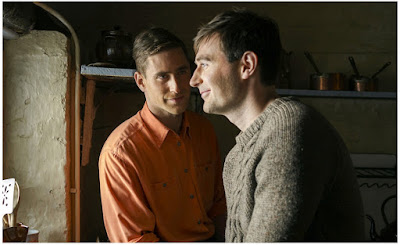 Vanderham), waiting at home for him, straight-laced Michael finds himself falling for Thomas. In 2017, an ageing Flora (Vanessa Redgrave) looks on as her grandson, Adam (Julian Morris), tentatively forms a relationship with his client Steve (David Gyasi) in a more accepting world. But while the external obstacles have fallen away, a minefield of internalised issues and dangerous temptations still line the road to happiness.