DUNE: THE SISTERHOOD
MARK STRONG IS EMPEROR CORRINO IN THE PREQUEL SERIES
HBO Max sf series that already has Emily Watson, Shirley Henderson, Indira Varma and Travis Fimmel in the cast has just added Mark Strong and Chris Mason to the cast. DUNE: THE SISTERHOOD, based on Frank Herbert’s novel, is set 10,000 years before the ascension of Paul Atreides and follows the Harkonnen Sisters (Watson and Henderson) as 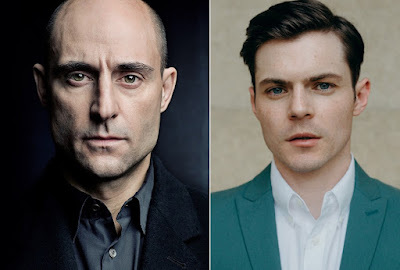 they combat forces that threaten the future of humankind, and establish the fabled sect known as the Bene Gesserit. Mark Strong will be Emperor Javicco Corrino, a man from a great line of war-time Emperors, who is called upon to govern the Imperium and manage a fragile peace. Chris Mason will be Keiran Atreides, a Swordmaster to a Great House whose ambition to live up to his family name is disrupted when he forms an unexpected connection to a member of the royal family.
TERRAFORMING MARS
TO BECOME A SF TV SERIES
Speaking of sf series, Deadline reports that board game TERRA- FORMING MARS will be turned into a sf TV series. Production company Cobal Knight is leaning towards a series but is also open for a feature take on the strategy game, which sees players compete to use resources and innovative technology to make the red planet inhabitable. Sold in over 1,5 million copies, the game highlights existential tropes like class struggle, colonialism, and ecological collapse. The adaptation will explore the unique human drama that inherently comes along with running a company tasked with creating oceans, building prosperous cities, and balancing the ecology of plant and animal life.
Posted by DEZMOND at 8:00 PM