THE RETURN REUNITES
RALPH FIENNES AND JULIETTE BINOCHE AFTER 20 YEARS
It will be a new retelling of Odysseus and his story with Ralph Fiennes and Juliette Binoche leading THE RETURN movie. After 20 years away, Odysseus (Fiennes) washes up on the shores of Ithaca, haggard and unrecognizable. The King has finally returned home but much has changed in his kingdom since he left to fight in the Trojan war.His beloved wife Penelope 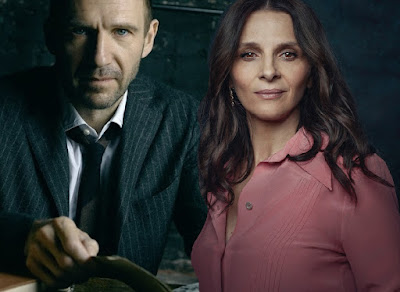 (Binoche) is now a prisoner in her own home, hounded by her many ambitious suitors to choose a new husband, a new king. Their son Telemachus, who has grown up fatherless, is facing death at the hands of the suitors who see him as an obstacle in their relentless pursuit of Penelope and the kingdom. Uberto Pasolino directs.
OPERATION NAPOLEON CASTS
JACK FOX AND IAIN GLEN
A coproduction betwen Iceland and Germany, based on the novel by Arnaldur Indriðason, OPERATION NAPOLEON movie will star our Sanditon hunkster Jack Fox and Iain Glen! Taking viewers from modern Iceland to America and Nazi Germany at the end of World War II, it follows young Icelandic lawyer Kristin, who gets drawn into the vortex of an international conspiracy when she receives grainy footage of an 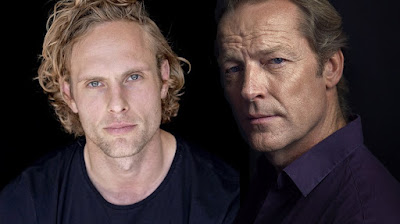 old airplane wreck, recently revealed by the melting of one of Iceland’s largest glaciers. The old German World War II plane not only brings ruthless criminals onto the scene, but also CIA vice director William Carr, who had already been secretly trying to remove the wreck for a long time. Kristin places herself in great danger, refusing to rest until the key has been discovered that will solve the riddle of Operation Napoleon!
JURASSIC WORLD DOMINION
A MINDBLOWING NEW TRAILER
And some crazy dinosaur fun in a stunning new trailer for JURASSIC WORLD DOMINION fantasy adventure which brings dinos back to cinemas June 10th! Chris Pratt, Bryce Dallas Howard, Jeff Goldblum, Sam Neill, Laura Dern, Scott Haze lead the cast of Colin Trevorrow's movie. Four years after the destruction of Isla Nublar, dinosaurs now live and hunt alongside humans all over the world. This fragile balance will reshape the future and determine, once and for all, whether human beings are to remain the apex predators on a planet they now share with history's most fearsome creatures in a new Era! Check out the insane trailer below and tell us what you think!
Posted by DEZMOND at 7:30 PM

Should be good, cannot wait to see who will play Telemachus!

The Return sounds really good! Life goes on, with or without. Washing up on shore 20 years means lots of change. We're all about Jurassic World here because my son doesn't give us a choice!

Odysseus did not really like the changes that happened in his absence, sadly.

I fear the Jurassic movies will never die. They just keep churning them out, over and over again.

It is shocking how they still manage to come up with a plot for them. With dinos living next to people, it sounds quite interesting.