RIDLEY ROAD TV SERIES
BBC RELEASES 1ST PHOTOS FOR POSTWAR THRILLER DRAMA
BBC has released first photos with newcomer Aggi O'Casey and our dear Village star Tom Varey as the leads of gripping new thriller RIDLEYROAD which will also air on PBS in USA. Based on a novel by Jo Bloom, it tells the story of a young Jewish woman, Vivien Epstein (Aggi O’Casey). After falling in love with a member of the 62 Group, she rejects her comfortable middle class life in Manchester and joins the fight against fascism in London, risking everything for her beliefs and for the man she loves. Inspired by the struggle of the coalition of Jewish men who stood up against rising neo Nazism in post war Britain, Vivien is working with them when she realises that Jack, her missing boyfriend (Tom Varey) has been badly injured. Vivien infiltrates the NSM, a neo-Nazi movement which is becoming increasingly prominent in London. As Vivien descends further into the fascist organisation her courage and loyalties are challenged. Rory Kinnear plays Colin Jordan, leader of neo Nazi movement NSM, Eddie Marsan also stars alongside Danny Hatchard, Samantha Spiro and Tracy Ann Oberman in the four part mini series!
EL CID SEASON 2 TEASER
TAKES US BACK TO ESPANA
Although I feast on epic shows like they're roasted potatoes, I do admit I found the first season of Amazon Prime's EL CID rather bland in taste and lacking in any even remotely delicious flavour, but for some reason the historical saga, that brings the story of Rodrigo Díaz de Vivar, a Castilian nobleman and war hero in medieval Spain, was renewed for another season which is coming to us soon as it is announced in the first teaser below and the first photos from the second season. Let us hope, the return will have better scripts, better acting and a better hairdo for the lead hero who was humiliated with the fugliest mullet in the first season, poor sod. 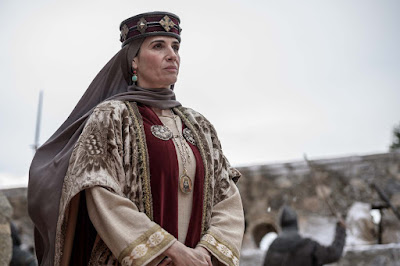 THE SECOND SEASON SHOULD
continue the story where it left off last December when King Fernando (Jose Perez), poisoned by his horrid daughter Urraca (Alicia Sanz) died and, instead of proclaiming his oldest son as his sole heir, divided the kingdom to all of his three sons Sancho (Francisco Ortiz), Alfonso (Jaime Olias) and García (Nicolas Illoro) making them the new kings of Castilla, León and Galicia. Devious princess Urraca will continue to weave her dark plots in the shadows, while our hero Ruy (who, played by rather weak and non charismatic Jaime Lorente, did not even feel like the hero in the first season with not a lot of screen time) will have to fight to save the land, the royal family as well as his own one. Of course, the disputes between all of them will probably lead to bloody battles. Elia Galera should return as their mother, treacherous and evil queen Sancha who plotted her husband's demise. Who needs enemies, when you have daughters and wives, right? Actress Amparo Alcaraz has joined the cast as queen Alberta.
Posted by DEZMOND at 1:00 PM