SHADOW AND BONE
NETFLIX EPIC TV SERIES
Oh, sing me a sad song, spylings, the spring landscapes on the small screens have been such a tragic wasteland so far! Out of new epic shows we only had Leonardo which started this Friday and then the only next one is arriving next week: SHADOW AND BONE series, based on the Grishaverse novels by Leigh Bardugo hits Netflix April 23rd. As Bardugo described herself - the series takes place in a very different kind of fantasy world. Think Imperial Russia, not Medieval England, repeating rifles instead of broadswords. Of course with the cast that looks as bland as the one from Twilight, and female lead charismatic as much as a lukewarm mash potato, don't raise your hopes too high! 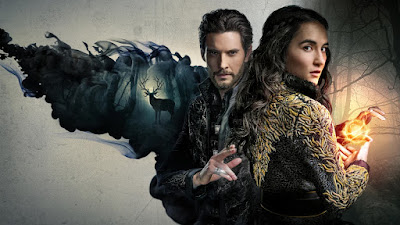 SHADOW AND BONE SEASON ONE
will see the story adapting two overlapping series in Leigh Bardugo’s Grishaverse: Shadow and Bone and Six of Crows. The eight episode series will, however, differ massively from those two sagas as they had to somehow connect the characters in them within one TV show. The story is set in a world that is split in two by a massive barrier of perpetual darkness, where unnatural creatures feast on human flesh. The protagonist is Alina Starkov, a young soldier and a citizen of the Russia inspired Kingdom of Ravka. She unexpectedly uncovers a power that might save her best friend and finally unite her country. As she starts to hone it, dangerous forces unite against her and only General Kirigan seems to be willing to help. Thugs, thieves, assassins, and saints are at war now, and it will take more than magic to survive.
WHO IS IN THE CAST?
With Eric Heisserer as the showrunner, the cast of the series, which managed to wrap its production over in Hungary back in February before the general lockdown, includes (it is strange that the producers have not find it convenient to put Russian actors in the cast but they did put Asian and black actors in a Russia inspired story): Jessie Mei Li as Alina Starkov, Ben Barnes as General Kirigan aka The Darkling, Freddy Carter as Kaz Brekker aka Dirtyhands, Archie Renaux as Malyen Oretsev, Kit Young as Jesper Fahey, Calahan Skogman as Matthias Helvar, Danielle Galligan as Nina Zenik, Amita Suman as Inej Ghafa, Sujaya Dasgupta as Zoya Nazyalensky, Daisy Head as Genya Safin, Julian Kostov as Fedyor Kaminsky, Zoë Wanamaker as Baghra, Kevin Eldon as The Apparat, Luke Pasqualino as David Kostyk, Jasmine Blackborow as Marie, Gabrielle Brooks as Nadia Zhabin. Our beloved Tom Weston Jones plays a very important character of general Zlatan.
Posted by DEZMOND at 1:00 PM