HALSTON TV SERIES
1ST EWAN MCGREGOR PHOTOS
Netflix has unveiled first poster and photos from their upcoming series HALSTON which will star Ewan McGregor as the legendary designer. The series will stream on what would be his 89th birthday May 14th on a global level. Beside McGregor, the cast of the mini series also includes Krysta Rodriguez as Liza Minnelli, Rebecca Dayan as Elsa Peretti, Bill Pullman as David Mahoney, Gian Franco Rodriguez as Victor Hugo, David Pittu as Joe Eula, Sullivan Jones as Ed Austin, Rory Culkin as Joel Schumacher, Kelly Bishop as Eleanor Lambert and Vera Farmiga as Adele. The sad thing is that the series comes from Ryan Murphy. 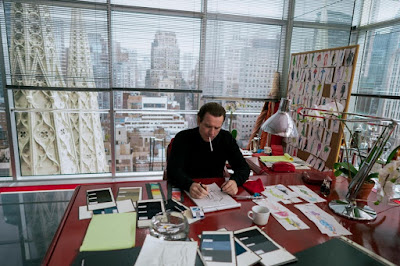 HALSTON TV SERIES
directed and executive produced by Daniel Minahan, follows the legendary fashion designer (Ewan McGregor), as he leverages his single, invented name into a worldwide fashion empire that’s synonymous with luxury, sex, status and fame, literally defining the era he lives in, 1970’s and ‘80’s New York — until a hostile takeover forces him to battle for control of his most precious asset… the name Halston itself. Stay tuned for the first trailer which is probably coming up very soon! Trailer is below:
Posted by DEZMOND at 1:00 PM