ATLANTIC CROSSING SERIES
ARRIVES TO MASTERPIECE
We've written about this one for years and it has now finally arrived to PBS Masterpiece where it aired its first episode last night and will continue with other seven every Sunday after already airing in some of the European countries. Coming from our favourite Beta Film ATLANTIC CROSSING, based on the true story of Norwegian Crown Princess Martha, who fights to save her country, offers a unique and never before seen perspective on the tragic events of World War II! Check out the preview trailer below and tell us what you think. 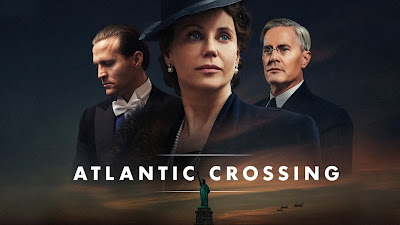 STORY OF ATLANTIC CROSSING
When the Nazis invade her country, the Norwegian Crown Princess Martha (Sofia Helin) makes a narrow escape and seeks refuge in the United States. Soon, she develops a close relationship with President Franklin D. Roosevelt (Kyle MacLachlan), which turns into deep affection. Martha tries hard to convince him to help save her country and Europe from the Nazis. But Roosevelt does not want to alienate his voters, who are strongly opposed to being drawn into the war. Martha realizes she must step out of her overprotected way of life and influence the public. ATLANTIC CROSSING sheds light on life behind the walls of the White House and on the unconventional marriage of Franklin and Eleonor, which had been subject to countless rumors.
Posted by DEZMOND at 1:00 PM