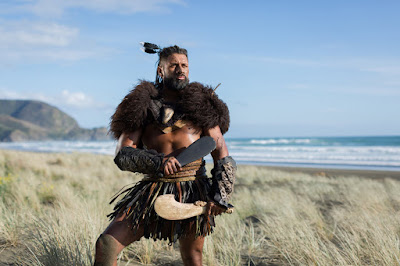 'THE DEAD LANDS'
NEW ZEALAND FANTASY SERIES
It was first a movie, back in 2014, and now New Zealand has shot an eight episode fantasy series THE DEAD LANDS which is currently seeking an international distribution. The series, which is not directly connected to the film of the same name and is instead an expansion of the world depicted in said film, is produced by GFC Films and stars Te Kohe Tuhaka, Jordi Webber, newcomer Darneen Christian, Vicky Haughton, Calvin Tuteao and Kirk Torrance. The show already aired on TV NZ and AMC's Shudder streaming service. Check out the trailer below, it is a rather strange mix of cheesy humour and silly gorefest which obviously
requires a rather open minded viewer, methinks. View it yourself and tell us what you think.


What's The Story Of The Show?
A unique new series, combining brilliant action adventure and mythical Maori culture with stunning locations and more than a touch of humour, has the story set in a mythical Aoteoroa New Zealand, in a time before time and
tells the story of Waka Nuku Rau (Te Kohe Tuhaka), a dishonoured warrior who dies, but whose ancestors in the afterlife send him back to the world to find redemption and honour. But the world Waka returns to is ravaged by the
supernatural, as the spirits of the newly dead now stalk the land and hunt the living. Waka and a young woman named Mehe must find a way to repair their broken world.