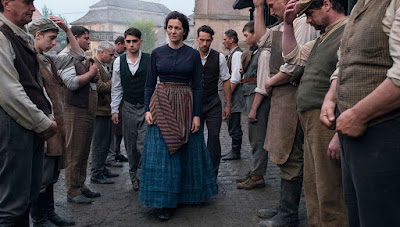 THE STORY OF OKTOBERFEST
revolves around a young girl who falls in love with a poor brewer's son. Their feelings are against her father's wishes - a rich mobster, who has come to town to try and bully his way into the inner circle of Munich's brewery dynasties. Soon, blood is being shed and the young brewer has to fight desperately to protect his own family from his love's father.


1ST 'WORZEL GUMMIDGE' PHOTO
FROM BBC NEW ADAPTATION
BBC has revealed the first photo of Mackenzie Crook as scarecrow from two part mini series WORZEL GUMMIDGE which he is also directing.  It sees two young strangers, Susan and John, arrive in the village of
Scatterbrook, where they encounter Gummidge. Their world is sent spinning into confusion when they realize Gummidge comes to life. The only person more shocked is Worzel, when he discovers that the children are not in fact fellow scarecrows but humans.
Posted by DEZMOND at 1:30 PM