DISNEY'S 'FROZEN 2'
NEW TRAILER AND POSTERS!
You've probably already seen the greatest movie treat today, but here it is at the spy's as well: new trailer for Disney's FROZEN 2 sequel which brings the sisters from Arendelle and their friends back to cinemas this winter, November 20nd around the world! Presumably to break all possible viewing records. TV stars Evan Rachel Wood (Westworld) and Sterling K. Brown (This Is Us) join the cast from the record breaking first animated movie which includes Kristen Bell as Anna, Idina Menzel as her sister Snow Queen Elsa, Jonathan Groff as trustworthy woodcutter Kristoff, Josh Gad as crazy Olaf the Snowman and
Santino Fontana as Hans.


FROZEN 2 trailer does not show much of the story other than Snow Queen Elsa fighting against the sea with her ice and then being joined by her sister Princess Anna and her boyfriend Kristoff  at the start of a brand new adventure which will be more epic in scope and will again feature crazy snowman Olaf and reindeer Sven. She must cross into the enchanted northern lands to unravel the mystery behind her magical powers. The trailer also reveals tons of breathtaking new landscapes and magical scenes, like the one with magical underwater horse. It also seems that Elsa will be rocking some seriously wintery stylish outfits in the sequel as well proving her status as one 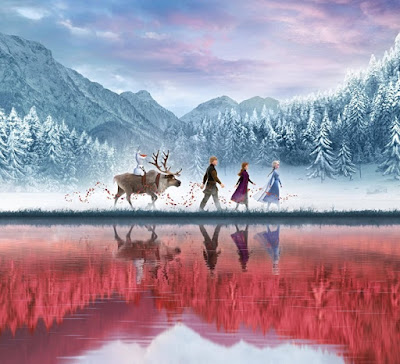 of Disney's most popular princesses. The adventure that will take them far away from Arendelle will again feature a brand new hit song from Robert and Kristen Lopez.