'MIDNIGHT'S CHILDREN'
SALMAN RUSHDIE TV ADAPTATION
Two Netflix projects about kids with special powers, starting with TV series adaptation of Salman Rushdie's MIDNIGHT'S CHILDREN which  follows the life of Saleem Sinai, born on the stroke of midnight on August 15, 1947, the time of India’s independence. His every act is mirrored and magnified in events that sway the course of India’s national affairs; his health and wellbeing are inextricably bound to those of his nation; his life is inseparable, at times indistinguishable, from the history of his country. Perhaps most remarkable are the telepathic powers linking him with India’s 1,000 other “midnight’s children,” all born in that initial hour and endowed with magical gifts.


'UMBRELLA ACADEMY'
FIRST TRAILER IS HERE!
Netflix has released a trailer for their new fantasy series THE UMBRELLA ACADEMY which will roll out February 15th based on the Dark Horse comic
books. It stars Tom Hopper, Robert Sheehan and Ellen Page.
On the same day in 1989, forty-three infants are inexplicably born to random, unconnected women who showed no signs of pregnancy the day before. Seven are adopted by Sir Reginald Hargreeves, a billionaire industrialist, who creates THE UMBRELLA ACADEMY and prepares his “children” to save the world. But not everything went according to plan. In their teenage years, the family fractured and the team disbanded. Now, the six surviving thirty-something members reunite upon the news of Hargreeves’ 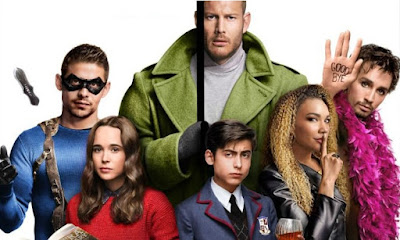 passing. They have to work together to solve a mystery surrounding their father’s death. But the estranged family once again begins to come apart due to their divergent personalities and abilities, not to mention the imminent threat of a global apocalypse.