'GUNPOWDER' EPIC MINI SERIES
FIRST EPIC TRAILER RELEASED!
Your Monday delight is the first trailer released by BBC for their new three part mini series GUNPOWDER which will start airing Saturday October 21st! Kit Harington plays famous rebel Robert Catesby who, back in 1605
tried to blow up the king and the parliament. Guy Fawkes, another famous rebel, is played by Tom Cullen, with Liv Tyler also in the cast. 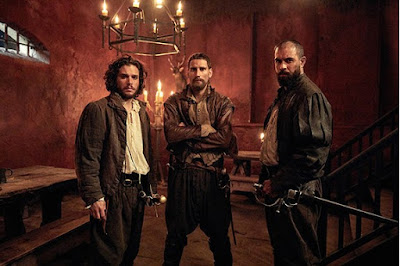 BLOW UP THE KING AND ALL HIS MEN TO HELL
England, 1603. Elizabeth I is dead and King James of Scotland has taken the throne. With the country at war with Catholic Spain, English Catholics are
persecuted and priests caught saying Mass are punished with death. Several attempts have already been made on the new King’s life. All so far have failed.
But deep in the heart of the Warwickshire countryside a new plot is brewing. A plot that will become legend, and leave a mark on the country that will still be felt over 400 years later. The three part historical drama follows the story of
the Gunpowder Plot, the attempt by a group of provincial English Catholics to blow up the House of Lords and kill King James I in order to help restore
a Catholic to the throne. Although to this day people mostly associate the famous Gunpowder Plot with Guy Fawkes, the mastermind was nobleman Robert Catesby, a 30 year old committed Catholic at a time when Protestant
England persecuted the church’s members relentlessly. He himself lost both his father and wife and is forced to raise his little himself on his own. That is when he starts recruiting help for his plot among family and supporters. Liv
Tyler plays his cousin Anne Vaux, who gets caught up in the plot. The cast also includes Peter Mullan, Edward Holcroft, Shaun Dooley, Robert
Emms, Derek Riddell and Mark Gatiss as Robert Cecil, the chief of the king's spies whose network of informants pursued the plotters in a game of cat and mouse.
OUR VERDICT  Borderline unwatchable due to its bloodthirsty depiction of violence under the superficial guise of historical accuracy, this monotonous, dragged out piece of television programming with Kit 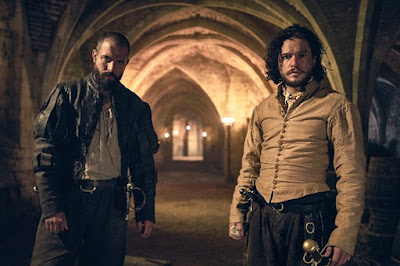 Harington's utterly bland acting and lack of any expression, is an unnecessary, base and vulgar gorefest catering to the insatiable hunger of modern audience for savage brutality.