While you are enjoying his role of brave warrior Anduin Lothar in record breaking WARCRAFT movie, you can expect to see Travis Fimmel in another new project: as 'Deadline' reports he and Chloe Sevigny have joined Steve Buscemi and young Charlie Plummer in LEAN ON PETE
An adaptation of Willy Vlautin’s acclaimed novel follows Charley Thompson, the itinerant teen abandoned by his mother as a baby as he embarks on a perilous journey in search of his long lost aunt and a possible home. Charley’s quest carries him from a horse racing track in Portland, through the sagebrush of the Oregon desert, to the city streets of Denver, his sole companion the stolen racehorse Lean on Pete.

I've already informed you of the whole slate of new actors that are joining queen of Scots' Mary's court in the fourth season of CW's REIGN, and now the latest one is British star Adam Croasdell!  He is to play Bothwell, Queen Mary’s third husband, a warm hearted bad boy who is deeply loyal, and ultimately deeply in love with Mary Queen of Scots. I've told you before that Steve Lund will play Lord Narcisse's handsome son, and that Will Kemp will play her second husband Lord Darnley! Breezily confident, charming and warm, he was born with a blood claim of his own to the English throne and a wildly ambitious mother whose love hinges entirely on his ability to secure a crown.


'LES MISERABLES'
TO BECOME NEW BBC SERIES
Well, after the great successes of WAR AND PEACE and DICKENSIAN, it was only to be expected that BBC will venture even deeper into the world of literary classics for their new series: according to latest news, Andrew Davies (the same scribe that turned the tragic and deeply 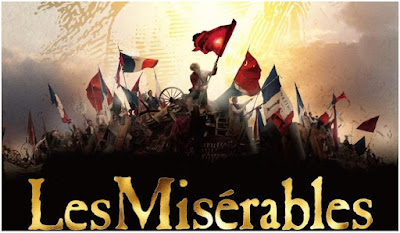 moving depth of Tolstoy's classic into an Austenian flimsy affair) will now pen a six episode mini series based on Victor Hugo's LES MISERABLES! But here's the catch = this time it will be without singing! It will, of course, follow Jean Valjean a former convict unable to escape the shadow of his past life while being pursued by his enemy, police officer Javert.
Posted by DEZMOND at 8:02 PM