RAISED BY WOLVES
SEASON TWO TRAILER IS HERE
We're launching a sf weekend today with a full trailer for the second season of Ridley Scott's sf series RAISED BY WOLVES which returns to HBO Max with new episodes February 3rd and don't forget to tune back tomorrow as I will bring you a spotlight on sf shows to expect this year. The series centers on two androids ( Amanda Collin, Abubakar Salim) tasked with raising human children on a mysterious virgin planet. As the burgeoning colony of humans threatens to be torn apart by religious differences, the androids learn that controlling the beliefs of humans is a treacherous and difficult task.
In season two, Android partners Mother and Father, along with their brood of six human children, join a newly formed atheistic colony in Kepler 22 b’s mysterious tropical zone. But navigating this strange new society is only the start of their troubles as Mother’s “natural child” threatens to drive what little remains of the human race to extinction! 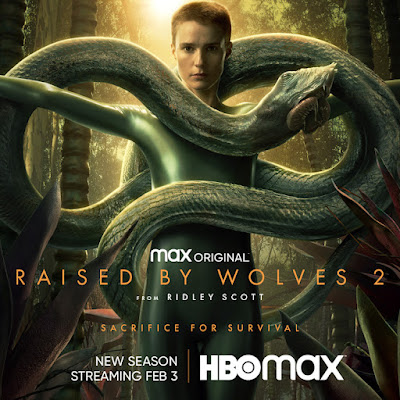 Travis Fimmel is also returning in season two which, judging by the trailer below, might be even more disturbing than the first one. Will you watch it, or was season one too weird and bizarre for you?
Posted by DEZMOND at 1:00 PM

Many Turks believe that "first turk raised by the wolf/wolves" but i dont! LOL. But i would like to watch it. I loved its trailer.

The same as Romans :)

Interesting concept, but I think I'll pass on this one as well. They lost me at the start of the trailer when it was several different people screaming and shaking in what I would assume is pain!

Didn’t watch season one. I actually forgot all about this one since I haven’t heard anyone talking about it. I’m surprised it has a season two coming.

But that is exactly why it got a second season = it was such a big talk around the town, everybody talked about it, especially its crazy end. It is simply a highly unique show unlike anything else. I will defo watch the new season, but probably during summer as I plan to watch Valhalla in February.

You're talking to different folks than I am, apparently. I haven't heard a single person mention this show in my inner or outer circles. And without too much going on because of stupid Covid, all we seem to discuss anymore is what's good to read or watch these days.

They probably prefer Netflix to HBO. This one was too shocking and unusual not to talk about it, especially when she gives birth to the snake....

They do. It seems like everyone is on Paramount Plus though these days. I haven't signed up for that one yet. I'll have to cancel one of my other streaming services first before Jason will let me get a new one. Hulu will probably get the ax since I think I'm all caught up on what I wanted to watch on there anyway.

Netflix is getting worse too, nothing overly interesting this year there, except an occasional show every few month. They plan to release 25 new Korean shows there. Like da fook, what are we Asia? And I imagine all will be terribly violent and sick. I'd glue myself to Britbox and PBS Masterpiece in your place, sweet sistah.

With the frenzy around Squid Games, I'm sure they are going to shove more Asian content like that down our throats. Jason and I were like wtf is the hype about when we watched it. I mean, we had to literally force ourselves to get to the end because we thought there would be some redeeming quality to garner that much talk about it. Nope. Was shit the whole way through :(

The humanity is getting more stupid and stupid.