MASTERS OF THE AIR SERIES
FIRST LOOK FROM THE SETS
We have first looks from the sets of two upcoming new series, first up Steven Spielberg's new war series MASTER OF THE AIR, a follow up to Band of Brothers, which will air on Apple TV starring Callum Turner, Austin Butler, Anthony Boyle, Laurie Davidson, Sam Hazeldine and over a hundred other actors! 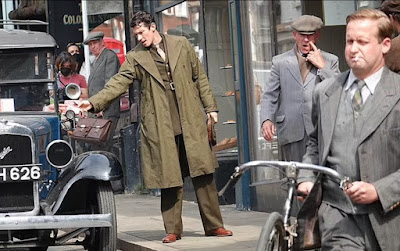 Based on Donald L. Miller's book
the mini series follows the Eighth Air Force of the United States Army, who famously brought the war straight to Hitler's doorstep by dropping bombs in the German capital of Berlin. Callum Turner leads the series as Major Egan, who took part in the lengthy bombing campaign during the Second World War. After being part of the Air Force's 'Big Week' which saw the team bomb Leipzig and multiple aircraft factories, they attacked the German Reich's capital Berlin before moving onto bomb other cities in the country! This will be one of the most expensive series ever with ten episodes costing between $200 and 250 million.
SLOW HORSES SERIES
1ST PICS FROM THE SPY SERIES
Also arriving sometime this year to Apple TV is a 12 episode spy series SLOW HORSES based on a book by Mick Herron with Gary Oldman, Jack Lowden and Kristin Scott Thomas in the cast. The story of the new drama follows a team of hapless British intelligence agents exiled to Slough House – an MI5 dumping ground for washed-up spooks. They're the service's poor relations, the slow horses and most bitter among them is River Cartwright (our Scottish boo Jack Lowden), whose days are spent transcribing mobile phone conversations. But when a young man is abducted, and his kidnappers threaten to behead him live on the internet, River sees an opportunity to redeem himself. But is the victim who he first appears to be. And what's the kidnappers' connection with a disgraced journalist. As the clock ticks on the execution, River finds that everyone involved has their own agenda. Gary Oldman stars as Jackson Lamb, the rejects’ brilliant but irascible leader, while Kristin Scott Thomas plays Diana Taverner, a formidable, high-ranking MI5 agent with the alias Lady Di. Olivia Cooke, Jonathan Pryce, and Sam Hazeldine again, also star.
Posted by DEZMOND at 1:00 PM