'THE WITCHLANDS' SAGA
TO BE TURNED INTO TV SERIES
Here are some good news for all of you fantasy fans out there! Jim Henson Company is going to adapt THE WITCHLANDS saga by Susan Dennard
into a live action TV series!

The saga, which consists of three books Windwitch, Truthwitch and Bloodwitch, is set in a world where three empires rule and every member of the population is born with a magical skill set, known as a “witchery”. Now, as the Twenty Year Truce in a centuries long war is about to come to an end, the balance of power will fall on the shoulders of two young women Safiya and Iseult, who must accept their fate, and themselves, to survive. Best friends Safi (a Truthwitch) and Iseult (a Threadwitch), as well as the cunning ship captain Prince Merik (a Windwitch), and the mysterious and powerful Aeduan 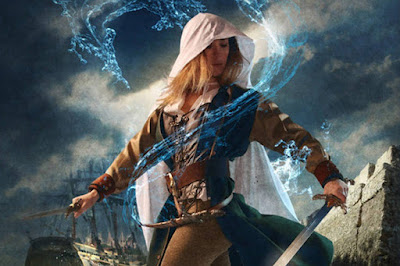 (a Bloodwitch) must navigate warring empires, political machinations, and mercenaries who seek to use their magic for selfish gain.


'WHERE HANDS TOUCH' TRAILER
FROM 'BELLE' DIRECTOR IS HERE!
First trailer has been released for Amma Asante's (you remember her period set movie Belle) new movie WHERE HANDS TOUCH set in Germany 1944: 15-year old Leyna (Amandla Stenberg), daughter of a white German mother and a black father, lives in fear due to the colour of her skin. When she meets Lutz (George MacKay), the son of a prominent SS officer and a member of the Hitler Youth - mandatory for all Aryan boys since 1936 - the two fall helplessly in love, putting both their lives at risk. An original coming of age story through the eyes of a bi-racial teen as she witnesses the persecution
of Jews and those deemed 'non-pure'. Try to ignore the horrid German accent you will hear from the leads in the trailer below, if you can :)