'THE WITCHER'
HENRY CAVILL TO LEAD EPIC FANTASY TV SERIES AT NETFLIX
Rejoice! Our boy is finally returning to the telly! After he so memorably appeared for the first time in The Tudors more than a decade ago, Henry
Cavill will star in another epic series THE WITCHER at Netflix!


Based on the fantasy saga by Polish writer Andrzej Sapkowskian it is an epic tale of fate and family. Geralt of Rivia (Henry Cavill), a solitary monster hunter (witchers are hunters who develop supernatural abilities at a young age to battle deadly monsters), struggles to find his place in a world where people often prove more wicked than beasts. But when destiny hurtles him toward a powerful sorceress, and a young princess with a dangerous secret, the three must learn to navigate the increasingly volatile Continent together. Daredevil's Lauren Schmidt Hissrich will be the showrunner, she said Cavill was the first one she auditioned and that no other actor has managed to beat his passion for the role! Game of Thrones, 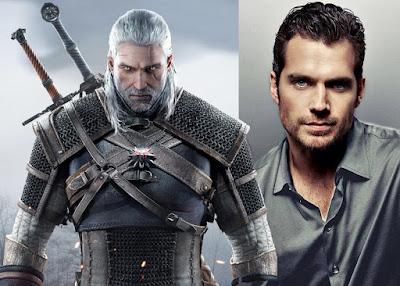 Outlander and Fear the Walking Dead directors will helm the episodes of the new epic fantasy television series.

NEW 'THE FAVOURITE' TRAILER
WITH RACHEL WEISZ AND EMMA STONE AT QUEEN ANNE'S COURT
Fox has released official trailer and first poster for historical comedy THE FAVOURITE which is out this November. Early 18th century. England is at
war with the French.  A frail Queen Anne (Olivia Colman) occupies the throne and her close friend Lady Sarah (Rachel Weisz) governs the country in her stead while tending to Anne's ill health and mercurial temper. When a new servant Abigail (Emma Stone) arrives, her charm endears her to Sarah. Sarah takes Abigail under her wing and Abigail sees a chance at a return to her aristocratic roots. As the politics of war become quite time consuming for Sarah, Abigail steps into the breach to fill in as the Queen's companion. Their burgeoning friendship gives her a chance to fulfil her ambitions and she will not let woman, man, politics stand in her way. Nicholas Hoult and Joe Alwyn also star. The poster is almost as unattractive as the trailer and direction are.