'LA BREA' APOCALYPTIC
TV SERIES GATHERS ITS CAST
If all the floods, fires, quakes and plagues around us aren't a sign enough of apocalypse for you, there will be more new apocalyptic shows on the
small screens too in the upcoming season. NBC has just announced that Natalie Zea will take the female lead in their high concept apocalyptic series LA BREA to be directed by Thor Freudenthal!


What's The Story?
When a massive sinkhole mysteriously opens in Los Angeles, it tears a family in half, separating mother (Natalie Zea) and son from father (Michael Raymond James) and daughter (Zyra Gorecki). When part of the family find themselves in an unexplainable primeval world alongside a disparate group of strangers, they must work to survive and uncover the mystery of where they are and if
there is a way back home. Just to remind you, La Brea is famous group of tar pits in Los Angeles, filled  with pitch that has seeped up from the ground in this area for tens of thousands of years. 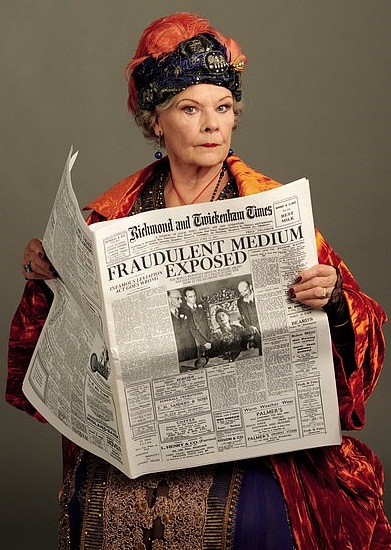 'BLITHE SPIRIT' TRAILER
PUTS JUDI DENCH AND DAN STEVENS AMONG SPIRITS
True love never dies. Literally in the first delightful trailer and poster for Studiocanal's fantasy comedy  BLITHE SPIRIT which will spirit its way into UK cinemas this May starring Judi Dench and Dan Stevens alongside Isla Fisher, Leslie Mann and Emilia Fox. Judi Dench plays a  spiritualist medium who holds a seance for a writer (Dan Stevens) suffering from writers block but accidentally summons the spirit of his deceased first wife which leads to an increasingly complex love triangle with his current wife of five years. The movie does not have a release date for Northern America, but will hit parts of Europe from June.