'ALF' REBOOT
IN EARLY STAGES AT WARNER?
Well, out of all comedy reboots, this one is the one I'd truly wish for (since Nanny reboot is unlikely)! The word around the net today is that Warner
Bros. is in early stages of bringing back 80's favourite sitcom ALF to the small screens! As you remember more than thirty years ago, the sitcom followed furry, sarcastic and yet adorable Alien Life Form called ALF who fell with his ship into the backyard of an unsuspecting family and stayed with them wrecking chaos in their house while trying to munch on their cat. If I'm correct, the new season would see Alf returning back to Earth but to some other family not the Tanners. The series had four seasons on NBC. Meanwhile, Frasier and Mad About You reboots are not happening after all.


JAMES NORTON TO JOIN
MERYL STREEP, EMMA STONE, SAOIRSE RONAN IN 'LITTLE
WOMEN'?
Unlike, Alf, a reboot that nobody really wants (there were really too many versions already) - the new big screen re imagination of LITTLE WOMEN might add, according to 'Deadline', our dearest James Norton to the cast which already includes Meryl Streep, Emma Stone, Timothee Chalamet, Saoirse Ronan, Eliza Scanlen and Florence Pugh! Helming the adaptation of Louisa May Alcott's popular novel is Greta Garwig. Set in the background of American Civil War, LITTLE WOMEN revolves around the March sisters, Meg, Jo, Beth, and Amy, on their journey to womanhood, guided by their mother Marmee.


'THE COOL KIDS' TRAILER
FOR NEW FOX SITCOM!
Speaking of sitcoms, check out the trailer for the new comedy that will follow Last Man Standing on Fox from September 28th!  THE COOL KIDS
follows a rag-tag group of friends living in a retirement community who are willing to break every rule in order to have fun – because, at their age, what do 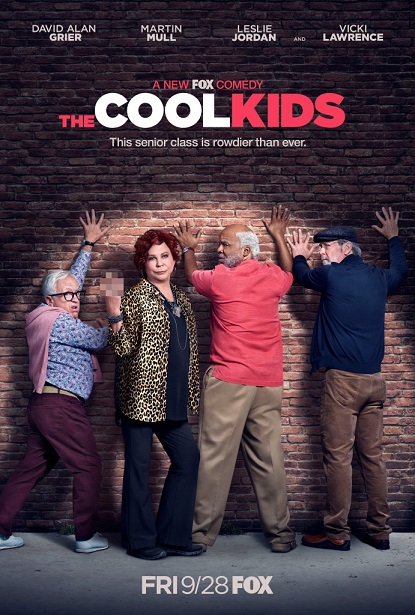 they really have to lose.Hank (David Alan Grier) is the leader of this motley crew, a gruff, opinionated, 21st century Archie Bunker who will go to any
lengths to have a good time. His loyal, but less than helpful, friends include Charlie (Martin Mull), a bumbling storyteller who constantly goes off on
tangents about some bizarre, barely believable episode from his life; and Sid (Leslie Jordan), a naysaying, pill-popping hypochondriac who shoots down every scheme, but still gets roped in. Complicating matters is Margaret (Vicki
Lawrence), a brash, confident woman who forces her way into their group and refuses to leave because she’s not going to take crap from anyone – especially not these three. But what unites them all is their shared belief that
they’re not done yet – not by a long shot. Growing old with dignity is for chumps. Our self-proclaimed “cool kids” are determined to make the third act of the lives the craziest one yet.