THE LAST KINGDOM
FINAL SEASON TRAILER
Destiny awaits March 9th which is when the fifth and final season of medieval series THE LAST KINGDOM arrives to Netflix and it seems it will be tragic for Uhtred at least judging by the trailer. After the final season you can also look forward to Seven Kings Must Die epic movie conclusion to the whole saga which started shooting last month. 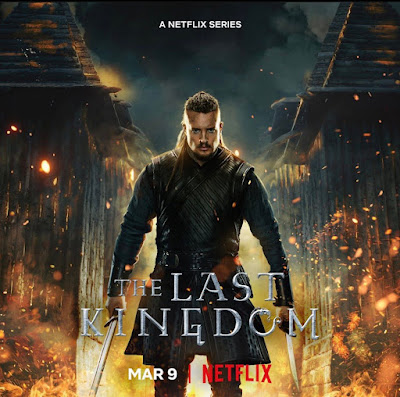 WHAT HAPPENS IN THE END
Years have passed since the events of the last season, and 9th century King Edward (Timothy Innes) is still forging ahead with his ambitions to unite the Saxon Kingdoms to fulfill his late father’s dream. Although a long-standing peace between Danes and Saxons now exists, that harmony is under threat. Not only by a new Danish invasion but a Saxon rebellion. Uhtred (Alexander Dreymon) has been entrusted with protecting Edward’s illegitimate son, the future King of England, Aethelstan. But the treacherous Lord Aethelhelm (Adrian Schiller) has ambitions for his grandson Aelfweard, Edward’s other son, to rule. We follow Uhtred as he faces his greatest enemies, and suffers immeasurable loss, on his quest towards fulfilling his destiny. Meanwhile, Edward treads a fine line between peace-keeper and authoritarian as he battles to bring together the fractured Kingdoms of the land. In a surprising twist of fate, Uhtred discovers that the quest to unite England may well be linked to his own personal destiny. Eliza Butterworth returns as the queen mother, Arnas Fedaravicius and Mark Rowley as Uhtred's knights Sihtric and Finan, Ewan Mitchell as Osfert, with Emily Cox as evil Brida who is now the leader of the enemy armies.
HISTORICAL MINI SERIES
ON 19TH CENTURY WOMEN WHO CHANGED COURSE OF HISTORY
As Cineuropa reports, Italian Mompracem and Picomedia, French firm Thalie Images and Germany’s Beta Film will develop a TV miniseries looking back at women in the 19th century who played a leading role in changing the course of history in Italy and Europe. The project will open a story about Virginia Oldoini, the ambitious and fierce COUNTESS OF CASTIGLIONE, an Italian patriot and fascinating spy sent to the court of Napoleon III in Paris, a ruthless and beautiful woman who shattered the court of Napoleon III with her charm and strength.
Posted by DEZMOND at 1:00 PM