BEHOLD IN WONDER: THE WILDLY MAGNIFICENT TEASER AND 1ST PHOTOS FROM AMAZON PRIME'S LORD OF THE RINGS EPIC TV SERIES RINGS OF POWER! 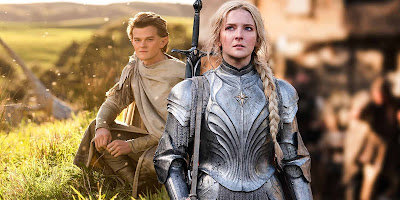 THE RINGS OF POWER
BEHOLD THE 1ST TRAILER!
Beside first beautiful photos published at Vanity Fair, Amazon Prime has now released the first magnificent trailer for the $500 million worth, and thus the most expensive ever in history, epic TV series THE RINGS OF POWER a prequel to famous Lord of the Rings saga from Tolkien. The first eight episode season arrives September 2nd with the second one already shooting in UK.
THE STORY OF THIS EPIC DRAMA
is set thousands of years before the events of J.R.R. Tolkien’s The Hobbit and The Lord of the Rings, and will take viewers back to an era in which great powers were forged, kingdoms rose to glory and fell to ruin, unlikely heroes were tested, hope hung by the finest of threads, and the greatest villain that ever flowed from Tolkien’s pen threatened to cover all the world in darkness. Beginning in a time of relative peace, the series follows an ensemble cast of characters, both familiar and new, as they confront the long-feared re-emergence of evil to Middle-earth. From the darkest depths of the Misty Mountains, to the majestic forests of the elf-capital of Lindon, to the breathtaking island kingdom of Númenor, to the furthest reaches of the map, these kingdoms and characters will carve out legacies that live on long after they are gone!
CHARACTERS OLD AND NEW
Beside younger versions of the characters we already grew to love or hate in Lord of the Rings and Hobbit films, such as Elven queen Galadriel, Elrond and Sauron, the new series will also have some new heroes in the principal ensemble cast which includes 22 actors. Morfydd Clark stars in the role of Galadriel, previously portrayed by Cate Blanchett, she is the commander of the Northern Armies,  Ismael Cruz Córdova as new character Arondir, a Silvan elf. His forbidden love Bronwyn, a healer, is played by Nazanin Boniadi! Robert Aramayo plays Galadriel's love Elrond, a politically ambitions young Elven leader, while Charlie Vickers stars in the new original role of Halbrand who is running from the past. Sophia Nomvete is dwarven princess, Disa! Owain Arthur stars as Durin IV, prince of the bustling subterranean realm of Khazad-dûm. Elven smith Celebrimbor whose skill withmetals and magic lead to the forging of the rings is portrayed by Charles Edwards. Maxim Baldry is a sailor named Isildur who will appear years before he becomes a warrior and cuts the soul-corrupting ring off Sauron’s hand, then falls victim to its powers himself. Hobbits will not appear in the show, but their ancestor species called the harfoots will. Lenny Henry plays a harfoot elder in the series, while Megan Richards and Markella Kavenagh star as two harfoots who encounter a mysterious lost man. Benjamin Walker, Augustus Prew, Simon Merrells, Kip Chapman, Joseph Mawle, Peter Mullan, Daniel Weyman also star.
THE WAR OF THE ROHIRRIM
Meanwhile, April 12th, 2024 has been set as a premiere date for LORD OF THE RINGS: THE WAR OF THE ROHIRRIM animated movie from Kenji Kamiyama, set around two centuries before The Hobbit and the main trilogy and exploring the exploits of Helm Hammerhand, the King of Rohan, and the creation of Helm’s Deep!
Posted by DEZMOND at 10:30 AM