'THE LOST VIKING'
FIGHT LIKE A VIKING
Now I know that both of these look delightfully trashy and cheap, but I figured we could all use us a Viking or two or three.... I'm sure you will all agree :) THE LOST VIKING is actually out next week on DVD! Directed and written by Emmet Cummins it stars gorgeous Dean Ridge as the Viking who dreams of adventure. The cast also includes Ross O’Hennessy, Kezia Burrows, James Groom, Ian Virgo, Dan Styles and others. 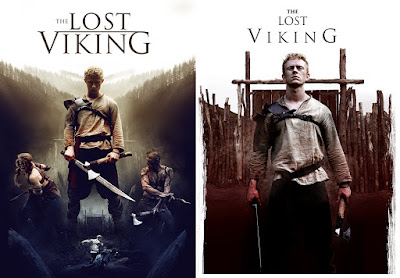 THE LOST VIKING is actually  a young Viking called Vitharr who arrives in Britain with dreams of conquest and adventure, but when his family and clan are ambushed and killed, he must survive alone in this strange,dangerous new land as he searches for his Uncle's settlement.


'VIKING DESTINY'
STARRING WILL MELLOR AND TERENCE STAMP!
A bit more richer and with at least some known names in the cast is another Viking adventure VIKING DESTINY which was both written and directed by David L.G. Hughes and starring British star Will Mellor next to legendary Terence Stamp and Paul Freeman with Victoria Broom, Anna Demetriou, Ian Beattie, Andrew Whipp, Laurence O'Fuarain also in the cast!


VIKING DESTINY follows Princess Helle of Volsung (Anna Demetriou) who is forced to flee her kingdom after being framed for the murder of her father the King (Andrew Whipp). Under the guidance of Odin (Terence Stamp) she travels the world gaining wisdom and building the army she needs to win back her throne of the Viking kingdom. In order to seize her legacy, she must develop the skills of a ruthless warrior.