'ELECTRIC DREAMS' SF SERIES
FIRST PHOTOS WITH RICHARD MADDEN AND HOLIDAY GRAINGER
News from the British isles today! First photos have been released for the new science fiction series ELECTRIC DREAMS specifically for The Hood Maker episode with our dearest Richard Madden and Holiday Grainger! Each of the ten episodes is done by a different director and
cast adapting one of the stories from Philip K. Dick's sf opus. Some of the other episodes of the Channel 4 and Amazon series will star Timothy Spall, Greg Kinnear, Jack Reynor, Terrence Howard, Bryan Cranston!

THE HOOD MAKER is set in a world without advanced technology where mutant telepaths have become humanity's only mechanism for long distance communication. Their powers have unintended
implications and when the public begins to embrace mysterious telepath blocking hoods, two detectives with an entangled past are brought in to investigate. This will be opening episode of the series and will air September 17th! 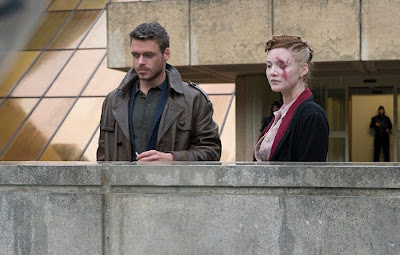 DEZZY'S VERDICT Short, and a bit cheap looking,the episode was still thoroughly intriguing with Madden and Grainger shining as the leading pair. They've always had a strong magnetism when together on the big or small screen.


'POLDARK' SEASON 4
REBECCA FRONT JOINS THE CAST
News are also arriving from BBC who have started production on the fourth, and probably penultimate, season of hit period set series POLDARK! The new season, which will air next year probably in summer again after scoring great ratings this June and July, has added Rebecca Front and young Louis Davison in the cast!


HELLO, LONDON!
Set in 1796, it will see Poldark (Aidan Turner) trying to defend Cornwall from an empowered George Warleggan (Jack Farthing), and risking everything as he embarks on a political journey which takes him to the capital. Ross strives to become a better man, but his dark and reckless streak is never far from the surface and will lead to him facing new enemies and suffering great losses. Demelza (Eleanor Tomlinson) finds her loyalties torn, Elizabeth (Heida Reed) tries to strengthen her marriage, Morwenna (Ellise Chappell) continues to be oppressed by husband Reverend Ossie Whitworth (Christian Brassington), and the Enyses (Luke Norris and Gabriella Wilde) are tested as never
before. The action of series four should run until the Christmas period of 1799.


NEW CAST!
After playing roles of snobbish, pompous mothers in Doctor Thorne and War and Peace costume dramas, Rebecca Front will do that again in the fourth season of POLDARK, by playing  Lady Whitworth, Ossie's formidable mother. Harry Richardson and Tom York return as Drake and Sam Carne, Beatie Edney as Prudie and Josh Whitehouse as Lieutenant Hugh Armitage, who remains smitten with adulterous Demelza especially after they scandalously shagged each other on the sand dunes of Cornwall. Little Louis Davison will play a more grown
up Geoffrey Charles, Elizabeth's son and Poldark's nephew.The series will also have a new villain in evil Monk Adderley who is friends with George. Max Bennett will play him!