'BRAVE NEW WORLD' CASTS
HARRY LLOYD AS MALE LEAD!
One of our favourite British lads, Harry Lloyd has just been cast next to Alden Ehrenreich in USA Network's TV series adaptation of Aldous Huxley's sf classic BRAVE NEW WORLD which imagines a utopian society that has achieved peace and stability through the prohibition of monogamy, privacy, money, family, and history itself! Lloyd will play male lead Bernard Max!
As citizens of New London, Bernard Marx (Harry Lloyd) and Lenina Crowne have only ever known a rigid social order, a perfect pharmaceutical called Soma, and a culture of instant gratification and ubiquitous sex. Curious to explore life beyond the strictures of their society, the two New Worlders embark on a vacation to the Savage Lands, where they become embroiled in a harrowing and violent rebellion. Bernard and Lenina are rescued by John the Savage (Alden Ehrenreich), who escapes with them back to New London. The arrival of John, a subversive outsider, in 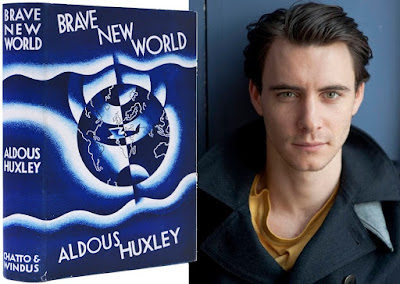 the New World, threatens to disrupt the stability of New London’s utopian society.  Harry Lloyd's Bernard Marx is an Alpha Plus who works as a counsellor for The Bureau of Stability, administering Soma to the citizens of New London.