Visually stunning, the series has one deadly weakness: John Turturro's almost scandalously bad acting, his approach to the role has no depth and is as 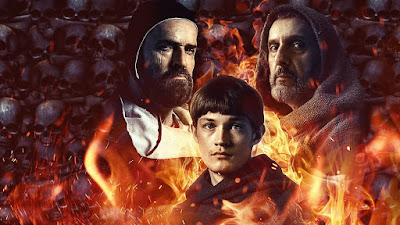 expressive as a dead stone of a monastery wall. His poor efforts in acting are borderline offensive. Emerson, though, absolutely shines in his marvellous master class in acting, and young Hardung is an absolute breath of fresh air and loveliness.

'THE NAME OF THE ROSE'
EPIC TV SERIES TRAILERS ARE IN!
Rejoice, people! Italian national broadcaster RAI (which gave us magnificent epic series Medici Masters of Florence) has released two gorgeous trailers for their small screen version of Umberto Eco's famous THE NAME OF THE ROSE which will start airing from March 4th in Italy. With almost $30 million spent on the production, the eight episode series really should not disappoint the audience. BBC will air the series in UK, Sky in Germany, OCS 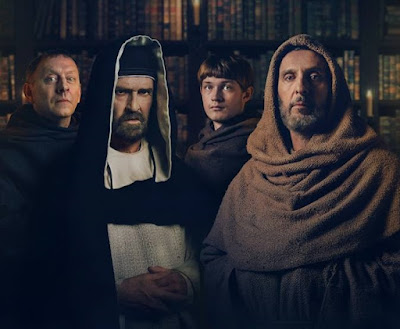 in France. Sundance TV will air it in USA and Canada, with local broadcasters airing it around Europe too.


THE STORY OF THE NAME OF THE ROSE RAI'S EPIC TV SAGA IS
set in good old Mediaeval Italy, more precisely in the year 1327, and revolves around the old Franciscan monk William of Baskerville (played by American actor John Turturro) and his kind and innocent young novice Adso von Melk (played by German model & actor Damian Hardung) just as
they arrive at a secluded monastery in the Alps. There they become witnesses to a series of mysterious murders. While Baskerville and Melk investigate and
search for the killer, they are hunted themselves by the merciless inquisitor Bernard Gui (Rupert Everett), who prosecutes those who criticize the Pope.


WHO'S IN THE BROTHERHOOD?
The series stars John Turturro (as William of Baskervillea 14th century Franciscan monk, as he investigates a series of unusual deaths at a remote
monastery) and Rupert Everett (as Inquisitor Gui) while Michael Emerson will play The Abbot, an ambiguous, greedy, over sensitive and
irritable prince of the Abbey! Gorgeous German actor Damian Hardung will be William's apprentice, Benedictine novice Adso. The cast will also include Sebastian Kock, Piotr Adamczyk, James Cosmo, Richard Sammel and our favourite Italian star Alessio Boni next to Greta Scarano. The series will hit US on Sundance May 1st!