'THE SHANNARA CHRONICLES'
EPIC TV SERIES SEASON 2
I must admit the first season was almost offensively bad, with talentless youngsters in the three lead roles and almost laughable lines, special effects and stories, but that did not stop THE SHANNARA
CHRONICLES epic TV series to get a second season! Admittedly it won't be airing on MTV anymore, but ten new episodes will start airing on Spike from October 11th! 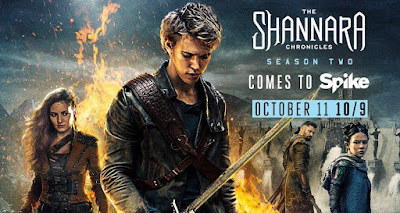 THE FOUR LANDS IN CHAOS
Second season starts its story a year after the events of last season, with The Four Lands in chaos. The re-emergence of magic has the populace terrified, and an organization called The Crimson is hunting down
magic users, using fear and intimidation to sow discord among the races. Wil (Austin Butler), scarred by the loss of Amberle and his separation from Eretria (Ivana Baquero), has turned his back on his
magical destiny to become a healer. But when a mysterious woman named Mareth (Malese Jow) saves Wil from a Crimson attack, he is forced to rejoin the fight.


BASED ON TERRY BROOKS SAGA
Based on the fantasy books by Terry Brooks, the second run will also star Manu Bennett (as wizard Allanon), Aaron Jakubenko (as Elven King Ander) and Marcus Vanco (as Bandon) along with new cast
(which looks as randomly picked as the original one) members Vanessa Morgan (Lyria), Gentry White (Garet), Caroline Chikezie (Queen Tamlin), and Desmond Chiam (General Riga).