LEA SEYDOUX IS BELLADONNA IN CHANNING TATUM'S 'GAMBIT'! GABRIEL CHAVARRIA TO LEAD 'WAR OF THE PLANET OF THE APES'! HALEY BENNETT JOINS EMILY BLUNT, REBECCA FERGUSON IN 'GIRL ON THE TRAIN'

the third movie in 20th Century Fox' sf franchise is going to cast young Gabriel Chavarria for the role of one of the two main human characters in the movie. The film has been scheduled for July 2017 cinematic release unleashing an all out war between humans and apes as it was announced at the end of DAWN OF THE PLANET OF THE APES. Matt Reeves is returning to the helm after the second movie in the franchise that he directed last year earned more than $700 million around the world. Andy Serkis will again play Caesar the ape leader.

Meanwhile, for all of you who liked the book, the big screen adaptation of Paula Hawkins' bestseller THE GIRL ON THE TRAIN has just cast Haley Bennett in the third lead female role next to Emily Blunt and Rebecca Ferguson who will play Anna, while Blunt plays Rachel, a recent divorcee who spends her daily commute fantasizing about the seemingly perfect couple who live in a house that her train passes every day. One morning, she sees something shocking happen there and becomes entangled in the mystery that unfolds, involving the other two women. Bennett also stars in the remake of MAGNIFICENT SEVEN. 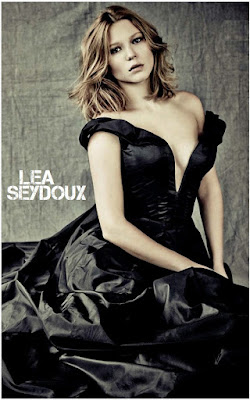 Speaking of Rebecca Ferguson, when she gave up on the possible gig in Channing Tatum's superhero spin-off GAMBIT after accepting the role in THE GIRL ON THE TRAIN, she left an empty place which now might be filled by French star Lea Seydoux. Apparently director Rupert Wyatt has offered her the lead female role of Belladonna Boudreaux aka Bella, Gambit’s love since childhood, who eventually gained powers of her own and became head of the Assassins Guild while GAMBIT, aka Remy LeBeau, was head of the Thieves Guild! You will watch Seydoux in new SPECTRE James Bond movie too.
Posted by DEZMOND at 1:30 PM