While we are anxiously waiting for the January premiere of the 2nd season of SPARTACUS now called VENGEANCE, you can check out a new poster for the epic show which will continue 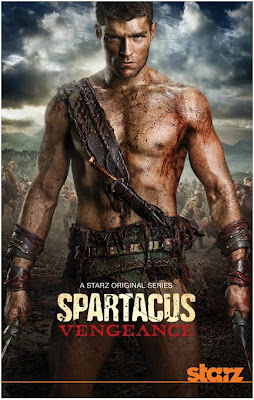 where the 1st season finished with the total bloodbath in the ludus. After that massacre, Capua is in an uproar. The gladiators have escaped and formed an uneasy alliance. Spartacus wants to exact revenge on the man responsible for killing his wife, but he will soon understand his life is about something greater than avenging Sura's death. His mission is to build an army, set free the slaves and topple the Roman Empire. As you know Liam McIntyre has taken over the role of the brave gladiator, Lucy Lawless is back and after surviving the massacre she wants a revenge of her own, Craig Parker returns as Roman commander Glaber with his wife Iilithya (Viva Bianca) who will have to watch her back from angry Lucretia! Click to watch the behind the scenes trailer.


HOLLYWOOD SPY HEADLINES
TV star America Ferera from UGLY BETTY and almost forgotten Julia Stiles will star in IT'S A DISASTER, an apocalyptic comedy which will center around 4 couples who meet for Sunday brunch only to find themselves stranded in a house together as 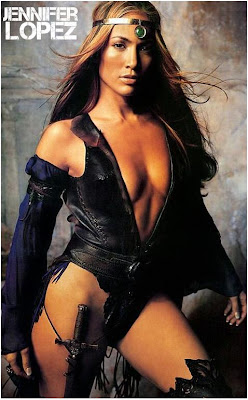 the world may be about to end. In the upcoming mayhem these four couples aren't going to let the potential end of the world get in the way of the relationship issues they all need to work out. According to "Deadline" Jennifer Lopez will produce and star in the movie adaptation of WHERE IN THE WORLD IS CARMEN SANDIEGO video game which follows the ACME agency's greatest detective Carmen Sandiego who becomes the world's greatest thief, so it's up to her former partner to follow her clues and track her down. Their cat and mouse game leads the partner to confront a greater mystery: is Carmen really a thief or a hero? Variety reports that Benicio Del Toro has been offered the role of a villain in J.J. Abrams' sequel to the last STAR TREK blockuster. I don't like it. He's one of those actors with no real charisma nor stage presence who happens to be loved by fanboys because he stars in violent films.
Your clip for the beginning of the week is the trailer for crazy new comedy WANDERLUST which hit theaters next  February starring Jennifer Aniston and Paul Rudd as a couple who 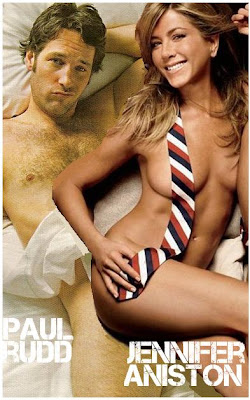 leaves the pressures of the big city and joins a freewheeling community where the only rule is to be yourself. After he is downsized out of his job, they find themselves with only one option: to move in with his awful brother in Atlanta. On the way there, they stumble upon Elysium, an idyllic community populated by colorful characters who embrace a different way of looking at things. Money? It can't buy happiness. Careers? Who needs them? Clothes? Only if you want them. Is Elysium the fresh start the two of them need? Or will the change of perspective cause more problems than it solves? The cast also includes Melissa Joan Hart, Malin Akerman and Ray Liotta.
Posted by DEZMOND at 12:00 AM

THOSE LOOK SO AWESOME! Nice blog by the way :)

I love Paul Rudd so I hope Wanderlust is good!

he is always so nice

WOW!! That pick of Paul and Jenn blew me away. Superlative creation. ;) I love the idea behind Wanderlust. If only there existed such a place. Maybe I should create a community like that, only be yourself...Everyone would think I had taken a header off the deep end into insanity.

glad you liked my little photo collage, Melsy :)
If you create a community like that, don't expect me to watch other people poop in the toilet :)))

I would never do that to anyone. All toilets would enclosed and well ventilated with everyone responsible for their own porcelain throne. LOL

Spartacus!! Can't wait for Lucretia to get her revenge, hehe.

Like Paul Rudd but not Aniston, so we shall see on that one. Can't wait for Spartacus season 2 too! That should be good.

Every time I hear about Spartacus I always feel bad about Andy Whitfield.

As for Aniston's movie. She's still just playing another variation of Rachel.

Lucy Lawless is xena,right? I haven't seen her in ages.

Hahaha that photo of Jenn and Paul is surprising.you sure know how to choose an image for your blog Dezz ;)

I really must get into this Spartacus. It looks right up my street!!

Spartacus will continue to entertain I hope with another round of epic madness and nudity.

@Melsy
darling, I had in mind the last scene in the trailer, check it out again :) It's hilarious

@Luanne
Lucretia is so gonna kick some Roman asses in the second season :) Not that she is an angel and that she didn't deserve some of the things that happened to her, but that Illythia deserves a revenge from her for locking Lucretia out in the ludus

@Pat
SPARTACUS is probably the best of the current shows in TV so me too can't wait for the new season in January :)

@Flixy
yep, Aniston sticks to what she does best, but it's interesting how people complain about that, but never criticize action stars for always starring in action flicks or comedians for always appearing in comedies. I myself think that romcoms are the most powerful movies because they are the only ones which bring smiles, warmth and optimism to people with the belief in love and emotions. They can even save lives, trust me...

@Novia
yep, you should see her in SPARTACUS it's the role of her life. She is absolutely amazing.
Glad you liked Paul's and Jennifer's pic :)

@Lurk
there's also a lot of depth, drama, amazing twists and brilliant dialogues in it beside lovely nudity and realistic madness

Dezz, I have to agree with you about Benicio Del Toro. He's also loved by many film critics as a great actor, but I've never been impressed by him, and wondered if it was just my reaction to the roles he's played, or my reaction to him as an actor.

Looks like a couple good upcoming chick flicks that I can see with my daughter :)

@Fabo
totally agreed, there are a lot of similar actors who have never given an impressive role although they are protected by come circles and fanboys.

@Lizzy
oh, I'm sure you will enjoy some of the nice upcoming romcoms, Lizzy :)

Bah, another Jen Aniston (anti)comedy? *sighs* No more, Hollywood, no more! I'd rather have a film adaptation of Where's Waldo. :-)

Benicio Del Toro? I dunno. But then, I was skeptical about Eric Bana and he was great. BTW Jennifer Lopez? Nice find. 8-D

@Dezzy well...I wouldn't say I like that photo...it was surprising ;)

Is the series worth buying DVD? I am planning to buy The Walking Dead next month...and I can only buy 1...Spartacus or walking Dead you think is better?

Come on, Dezmond, what's this picture you made of Aniston and Rudd? XD Crazy!!
Anyway, it's weird to see Rachel and Phoebe's husband together (says the big "Friends" fan!).
Hope this movie will be better than "Horrible Bosses", in which Aniston is ruined by her role. How could she do that, seriously?

Movies on my Mind said...

Gosh, that picture of Aniston. It's completely overshadowed the trailer. I can't stop looking at it. Bravo!

@Erin
it's a very old pic, but I love that epic photo session she did back in the days when we still thought she was cute and nice...

@Maurice
Bana was a great villain, and so was Tom Hardy who was relatively unknown back then

@Novia
you wouldn't believe me if I tell you that I didn't notice the naughty position of the two of them in the pic, I just wanted them naked and it turned out they're posing naughty too :)
SPARTACUS definitely!

@Lucinda
I'm probably the biggest fan of FRIENDS :) I think I watched each and every episode of all seasons at least five to ten times :) Rudd was great as Phoebe's hubs :)

@Movies
I did post that pic of Jen a couple of times before :) but I guess it's the Monday that makes people notice it today :) Glad you enjoyed it. It's from her GQ shoot

@Pesos
I don't like her either as a person. Back in the days I loved her music (first album) and her roles (THE CELL, SELENA) but now I don't because she wears fur and hates animals.

I love what you did with Paul & Jen, though. Well done.

J Lo as Carmen Sandiego? That movie's going to suck.

I love your blog.... by the way Aniston is going by a new name these days.... Jennifer Airbrush Aniston my sources say.

@Josh
he he it seems my picture of Jen and Paul is the main hit today :)
GLad you agree on Benicio

@Steve
thanks :) I love to be loved :)And you might be onto something with that Aniston's new name :)

Spartacus will bring us back some delightful naughtiness :)

I'll take your word and see if I can find it next month ;)